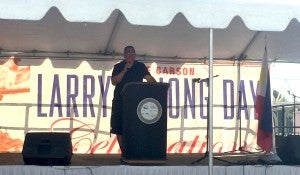 Johnny Itliong, the son of the late labor leader, recalls the life and legacy of his father.

The Filipino community turned out in force for the annual celebration, starting with the parade of various Fil-Am organizations followed by the national anthems and entertainment performances. One of the event highlights was the narration of “The Legacy of Larry” by Itliong’s son, Johnny.

Johnny Itliong told INQUIRER.net that he was grateful to the local government for “helping me to start commemorating the Larry Itliong Day celebration to recognize my father’s work.”

The City of Carson became the first US city to recognize October 25 as Larry Itliong Day through City Council Resolution No.10-108 on October 5, 2010. California followed with Governor Jerry Brown signing AB 7 into law, recognizing the Larry Itliong Day celebration, which was introduced by Assemblymember Rob Bonta on June 30, 2015.

At the program, the City of Carson also presented labor awards to Tony Dorono of Filipino Migrant Center and Victor Narro of UCLA Labor Center.

“It is an honor to get this award not because of me but the work that we have done with organizing Filipinos in America especially the healthcare workers in my union work. Our organization [Filipino Migrant Center] is doing a lot of community work focusing on low income and working class community,” Dorono said. 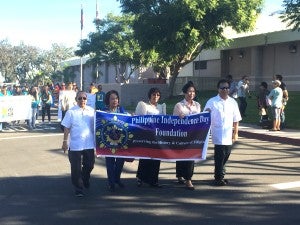 The Filipino Migrant Center president and co-founder said that Larry Itliong’s legacy is very important as the likes of Itliong and his colleague Philip Vera-Cruz fought for the rights of Filipino community, leading to “lots of privileges that Filipinos are enjoying now.”

Known as “Seven Fingers” and “one of the fathers of the West Coast labor movement,” Larry Itliong organized the Alaska Cannery Workers Union in the 1930s and became instrumental in winning a contract calling for eight-hour days with overtime pay.

He served as vice-president of the Cannery Workers Union in Seattle, Washington in 1953. In 1956, Itliong led the Filipino Farm Labor Union in Stockton, which received support from the American Federation of Labor and Congress of Industrial Organizations (AFL-CIO). 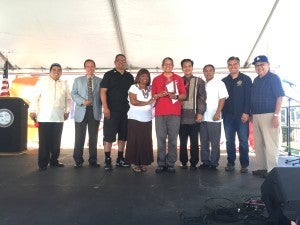 Both labor strikers led the historic march to Sacramento to fight for better working and living conditions. The strike finally ended in July 1970 with higher wages and medical plans met.

After leaving UFW, Itliong went to Brazil and Chile to defend the farm workers from injustice and abuse.

But Itliong’s contributions to the farm labor movement had been overlooked, according to those who fought for his recognition and that of other Filipino American labor leaders.