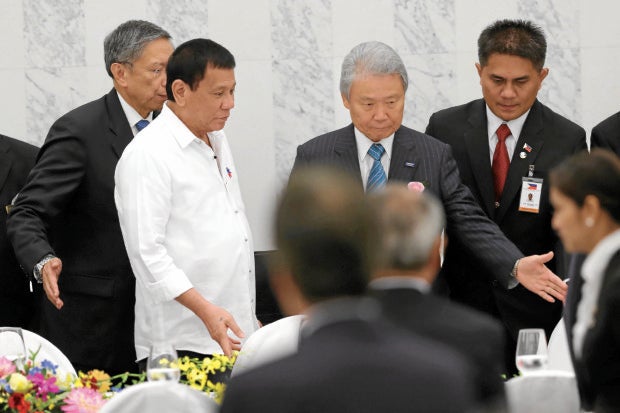 BUSINESS FORUM At a luncheon in Tokyo, President Duterte tells Sadayuki Sakakibara (middle), chair of the Japan Business Federation, that he supports constitutional amendments that will pave the way for a federal form of government. —AFP

TOKYO—Amendments to provisions in the Philippine Constitution that restrict foreign participation in certain areas of the economy are forthcoming, but limits to foreign ownership of land will remain, according to Finance Secretary Carlos Dominguez.

Dominguez made the announcement at the Philippine Economic Forum here as Japanese businessmen look forward to the lifting of foreign investment restrictions in the Constitution, which would allow them to be more involved with the Philippine economy.

“We expect the relaxation of restrictions on foreign investment currently stipulated by the Constitution,” Teruo Asada, cochair of the Japan-Philippines Economic Cooperation Committee, said at the Philippine Economic Forum, a few hours before President Duterte spoke at the same gathering.

“The Duterte administration already announced the constitutional amendments through a constitutional convention and I believe you’re discussing how to practice it,” Asada added.

At the same forum, Dominguez said: “In the near future, the government has called for a constitutional convention to open up those areas of our economy that are limited by the Constitution, with the exception of land ownership.”

By next year, the government will open up areas of investment that have been administratively limited, he said.

Mr. Duterte is backing the move to amend the Constitution, mainly to pave the way for a federal form of government.

He has said that he prefers a constituent assembly over the more costly constitutional convention, which involves the election of delegates, to make changes to the fundamental law of the land.

Dominguez said this was a fine time to look at the Philippines as an investment destination, as he laid down the President’s economic agenda.

The economy is vibrant, the country has a young population and there is a lot of potential for expansion, he said.

The administration intends to sustain a 7-percent economic growth or to do better, and to bring down the poverty rate from 26.5 percent to 17 percent by 2022.

“The poverty reduction targets are our principal concern,” he said.

He also said there was a need for the country to modernize ports and domestic shipping, and reduce power costs.

The administration is also working to reduce income and corporate income tax rates.

To raise state revenue, the reduction would be supplemented by taxes on products that damage public health and pollute the environment.

“I see the tax reform program we have now submitted to our Congress as the lynchpin of the broader reform program for building an inclusive economy. This is a propoor tax program with 40 percent of public spending directed toward public services,” he said.