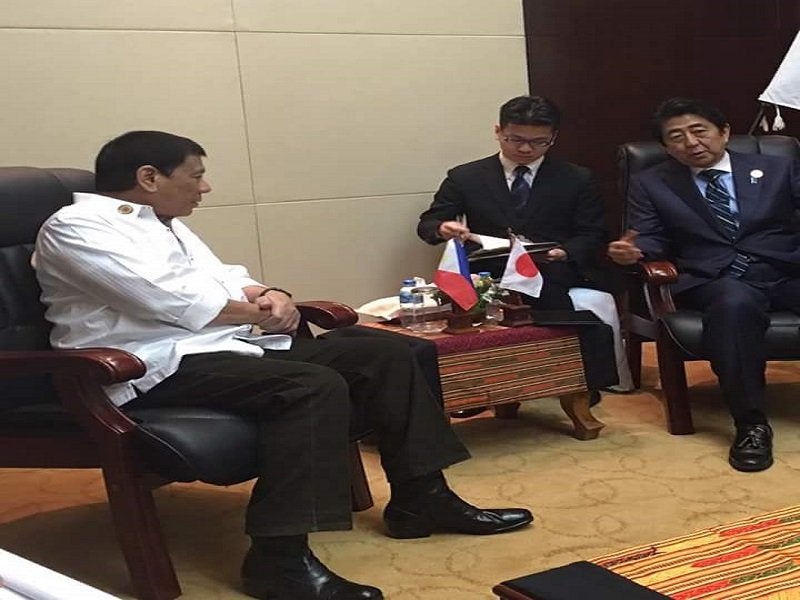 MANILA — President Rodrigo Duterte is visiting Japan to discuss maritime defense cooperation and attract government financing and private investments in high-impact projects in transportation and
infrastructure into the country.

In his departure speech at the Ninoy Aquino International Airport, the President called this “an important time” in for Philippines-Japan relations especially as he has declared his administration’s pursuit of an “independent foreign policy.”

“I go to Japan with full trust that we can understand each other and Japan will understand my position vis-à-vis with the foreign policy that I want to implement. It’s just a question of a policy that is really truly Filipino,” said Mr. Duterte.

During the three-day official visit, the President is expected to meet Prime Minister Shinzo Abe, members of Japan’s parliament, business groups and Emperor Akihito. Abe invited Duterte during the ASEAN meeting in Laos to visit Japan whose citizens were keeping tabs on Duterte.

“We will discuss, among others, greater politico-social and defense cooperation particularly in maritime domain awareness and maritime security,” said the President.

The President called Japan, a key ally of the United States, “a valued strategic partner and one of our true friends. He said Philippine-Japan relations were based on “adherence to the rule of law and the peaceful settlement of disputes,”

The President denied he would immediately reject a proposal for a Visiting Forces Agreement with Japan as he has not seen any document pertaining to such military drills similar to what has been conducted with the United States.

If ever, he said his policy was to discourage the entry of foreign soldiers in the country and their basing within Philippine territory whether for short periods within the year or long periods. “I do not have to dovetail what the policies of our countries are and especially in the matter of stationing of military troops in my country. I really… I really hate it. I don’t want it. We don’t need it. We are not going to war and there’s not going to be any war in the future,” said the President.

When a Japanese reporter asked him which country he liked more, the President quickly replied: “Between China and Japan, I think I love the Philippines more.” The President went on a four-day state visit to China last week where he obtained loan and investment promises worth P700 billion.

In Japan, the President has said he will seek joint ventures in key infrastructure development, including getting the experience and expertise of Japan in developing high quality and modern public transportation. He said Mindanao would be the “central focus” of his bid to attract more Japanese loans and investments.

“I look forward to meeting business leaders in Japan. I will tell them clearly that the Philippines is open for business. The visit will be an opportunity for me to personally thank Japan for its pre-eminent and
peerless role as the Philippines’ development partner. I shall seek the strengthening of this role through more high-impact projects that will benefit our nation,” said the President.

He was looking forward to meeting Akihito, and this meeting would be of “great and special significance” for him.

“It reaffirms at the highest level the positive transformation of ties between our nations and peoples. It renews our shared commitment to a forward-looking partnership that is founded on mutual respect, dignity and solidarity. It will capture in one moment the full-range of our relations with a country that is kept at high-regard and definitely deserves its unique place,” he said.  SFM