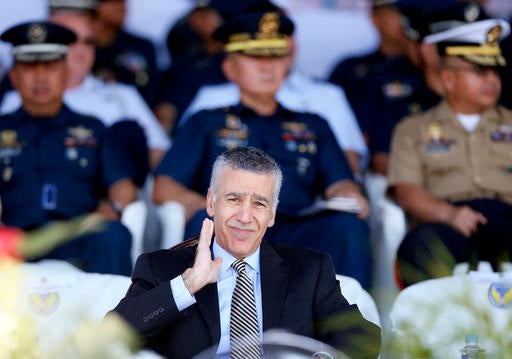 Outgoing U.S. Ambassador to the Philippines Philip Goldberg waits for the ceremony to start for the Philippine Air Force C-130T cargo plane in a formal turnover of the plane, the second to be acquired through the United States Excess Defense Articles(EDA) at Villamor Air Base in suburban Pasay city, south of Manila, Philippines Monday, Oct. 24, 2016. AP

The vitriol spewed by President Duterte against the Unites States was “inconsistent” with the decades-old alliance between the US and the Philippines, outgoing US Ambassador to the country Philip Goldberg said on Monday.

The American diplomat, himself at the receiving end of the President’s verbal attacks, admitted that the statements issued by Mr. Duterte during his visit to China last week was a cause of concern for the US government.

Goldberg, who led the turnover of the US-made C130-T military plane to the Philippine Air Force at Villamor Airbase in Pasay City, said US State Department Assistant Secretary Daniel Russell visited Manila on Monday to “seek clarification” on the scathing remarks made by the President.

“It’s clear that many of the things that have been said are inconsistent with friendship and alliance,” Goldberg told a press briefing after the turnover program.

“We are trying to sort out exactly what that means in policy terms (and) in terms of our relationship… We’ve always treated the Philippines as an equal and as a sovereign country,” he said, adding:

“That is why we are seeking clarification because on our part, we have a very strong sense that the Philippines is an ally, a friend. We have a strong commitment to its defense.”

Amid the President’s tirades against the American government, Goldberg said the 70-year-old military cooperation between both countries would remain as it was “built on mutual respect and admiration.”

In his brief speech, he lamented the “changes” that had transpired six months since he last witnessed the formal turnover of a similar military aircraft which the Armed Forces of the Philippines also acquired from the US.

Said Goldberg: “Quite a bit happened, quite a bit changed since then. But one thing hasn’t changed; that the United States’ commitment to the Philippines remains as strong as ever.”

In his state visit to Beijing, Mr. Duterte told Chinese officials and businessmen that he would “separate” himself “both military and economic” from the influence of the world’s only remaining superpower.

The President, who often describes himself as a socialist, had publicly made known his dislike of the country’s former colonizers even before his trip to the Chinese capital.

Like in his previous controversial statements, the President clarified that he was not about to sever the country’s ties with the US, saying it would be “to the best interest of my country” to keep the relationship with America.

Despite this, Goldberg remained confident that the issues triggered by the Chief Executive’s tough talk would be ironed out soon by the two countries.

The American diplomat said he would end his three-year assignment in Manila within the next few days “still very optimistic that we can do that.”

Meanwhile, Goldberg described as “absurd” the fear of former President and now Manila Mayor Joseph Estrada that America might topple Mr. Duterte because of his repugnance to the US influence.

“The United States is a great friend of the Philippines (and) respects the democracy in the Philippines and the process that has happened to elect a new president and a new administration,” he said. “Those are fundamental core beliefs of the United States and any statement that we would, in any way, be involved in such a thing is not right.”/rga