Duterte urged to push legalization of undocumented OFWs in China 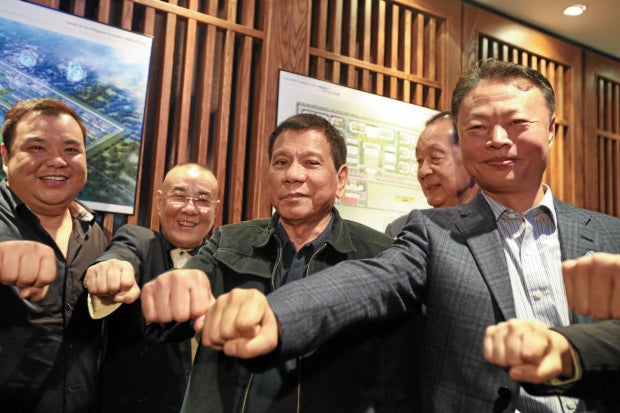 President Rodrigo Duterte along with Chinese Ambassador to the Philippines Zhiao Jianhua and officials of the Friends of the Philippines Foundation poses for a photo at Dadong Roast Duck Restaurant in Beijing, China on October 19. KING RODRIGUEZ/Presidential Photo

A party-list lawmaker representing overseas Filipino workers (OFWs) in Congress urged President Rodrigo Duterte to push for the legalization of over 200,000 undocumented migrant workers in China.

In a press briefing on Monday, ACTS-OFW Rep. Aniceto Bertiz III said there are around 200,000 undocumented Filipino workers in China as household workers, tutors, private teachers, among others who were not given work visas by China.

Bertiz urged Duterte to pitch for the documentation of these illegal migrant workers as a confidence building measure in resuming  bilateral talks with China on the maritime dispute over the West Philippine Sea.

The Philippines won its arbitration case against China in the maritime claim over the West Philippine Sea that invalidated China’s nine-dash line based on historic claims. But the Duterte administration is cool to the idea of resuming bilateral talks and setting aside the arbitral ruling for the meantime.

(Recognize the workers as legal… This was mentioned by Labor Secretary Bello III, that the President would be asked to request for the legalization of 200,000 undocumented OFWs in China.)I

Labor Secretary Bello earlier said he had urged Duterte to discuss with Chinese officials the documentation of illegal OFWs in China during his state visit from Oct. 19 to 21, which earned the country $24-billion investment and credit line pledges from China.

(Basically, that will be a good indication in showing China’s sincerity in their partnership with the Philippines.)

Asked about legalizing Chinese aliens in the Philippines as a trade-off, Bertiz said it would be better to clean up the issue of undocumented workers first before getting into a consensus in terms of migrant workers’ concerns in both countries.JE/rga

READ: Duterte says he won’t sever ties with US | Duterte announces military, economic split with US