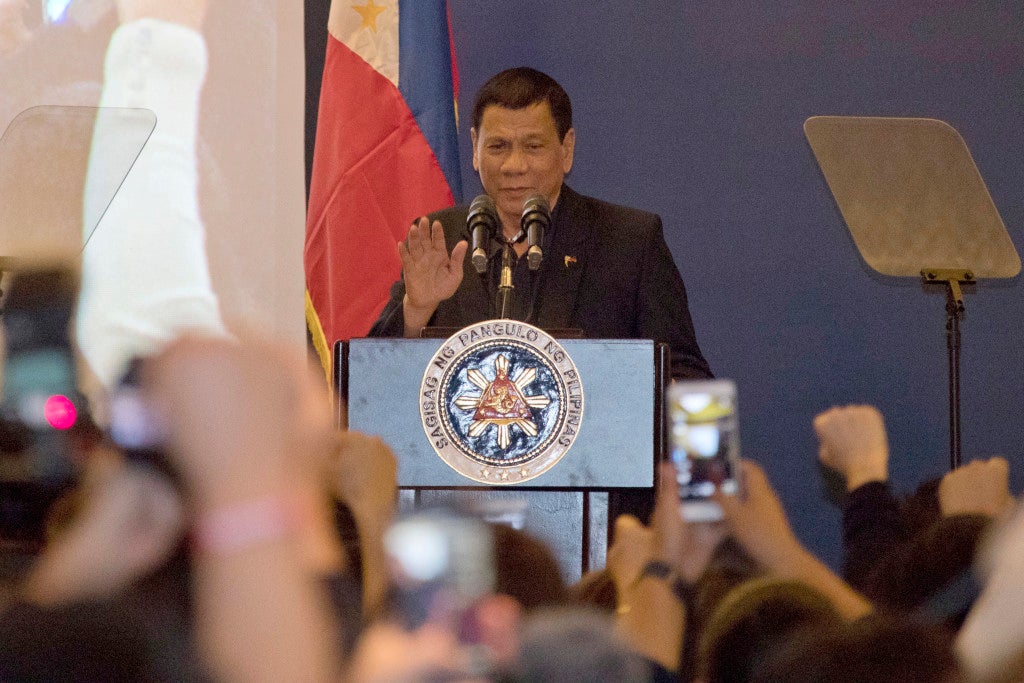 MANILA, Philippines — Philippine President Rodrigo Duterte said Friday he did not mean he would cut off ties with the United States when he said in China that he was separating from the US, adding it’s in his country’s best interest to stay with America.

Despite the clarification, the tough-talking president kept up on his tirades against the US, saying in a late-night speech in his southern hometown of Davao city that he would never travel to America “in this lifetime.”

At an economic forum Thursday in Beijing, where he made a state visit, Duterte declared “my separation from the United States … both in military and economics also.” His pronouncement was met with applause, but Duterte did not explain what he exactly intended to do and when.

Duterte, however, said in an arrival speech in Davao that he was not severing ties with his country’s treaty ally that is home to a large number of Filipino expatriates.

“When you say severance of ties, you cut the diplomatic relations. I cannot do that. Why? It’s to the best interest of my country that we maintain that relationship,” Duterte said, adding that Filipinos were not ready to embrace such an option.

What he meant by his remarks in China, Duterte said, was ending a Philippine foreign policy that closely leaned toward the US

Ahead of his China visit, Duterte made a series of pronouncements to curb Philippine security engagements with the US, including the removal of American counterterrorism forces in the country’s south and his opposition to planned joint patrols with the US Navy in the South China Sea. He also wanted to stop annual joint combat exercises the Philippines hosted alongside the US military that China opposes.

Duterte has said he did not want to embroil the Philippines in an unwinnable war with China, which could instead be tapped as a major trading partner and source of development funds.

US officials said they have not received any formal Philippine notice of Duterte’s pronouncements, adding the alliance benefits both countries and should continue to blossom.

However, White House spokesman Josh Earnest said Friday there had been “too many troubling public statements” by Duterte in recent months leading to uncertainty about his intent. He said that the top US diplomat for East Asia would discuss that uncertainty when he travels to the Philippines this weekend.

US-Philippine ties also got attention on the US presidential campaign trail Friday. Republican candidate Donald Trump told a rally in North Carolina that the Philippine shift toward closer relations with China after decades of a pro-US foreign policy showed that “America has grown weak.”

He said that the Philippines is a “very important strategic ally” and China and Russia “are probably going to take it.”

Duterte’s reaching out to China, which has been locked in longstanding territorial disputes with the Philippines in the South China Sea, and his severe criticisms of the US has come under fire at home.

Former Philippine Foreign Secretary Albert del Rosario, who brought the triumphant arbitration case against China over the disputes, said Duterte’s shift from Washington to Beijing should be regarded “a national tragedy.”

“The declared shift in foreign policy, casting aside a long-time reliable ally to hastily embrace an aggressive neighbor that vehemently rejects international law, is both unwise and incomprehensible,” del Rosario said in a statement.

“What is unfolding before us must be considered a national tragedy, which does not need to happen,” he said.

The criticism by del Rosario, a respected Asian diplomat, is among the strongest so far of Duterte’s declared policy to back away from America while reaching out to China and Russia. His main political ally, former President Fidel Ramos, has also criticized Duterte’s profane tirades against President Barack Obama and UN Secretary-General Ban Ki-moon.

As the foreign secretary of Duterte’s predecessor, Benigno Aquino III, del Rosario spearheaded the filing of an arbitration case that challenged the validity of China’s claims to virtually the entire South China Sea. In its July ruling, the tribunal invalidated China’s claims under a 1982 UN treaty in an embarrassing defeat that Beijing has ignored.

The US and its Western and Asian allies have called on China to respect the outcome.

At the end of Duterte’s trip to China, both countries announced in a joint statement several trade and business deals and closer cooperation on a range of concerns. They added they have resumed dialogue on the South China Sea.

There was no mention of the arbitration ruling or Duterte’s call for China to respect the rights of Filipinos to fish in the disputed Scarborough Shoal, where Beijing’s coast guard ships continue to drive them away. But both sides agreed to continue talking.

“Without prejudice to other mechanisms, a bilateral consultation mechanism can be useful, which will meet regularly on current and other issues of concern to either side on the South China Sea,” the joint statement said.

Read Next
Wonder Woman named a special UN ambassador, despite protests
EDITORS' PICK
House energy committee chair Arroyo bats for cheap electricity
Honolulu Café is the cure for your Egg Tarts and Roastings cravings
Petition to reverse Comelec decision on Bongbong Marcos’ DQ case reaches SC
Luxe property: A way to build, preserve wealth
PH detects local transmission of Omicron subvariant BA.2.12.1
OVP: Pilot’s claim vs Robredo ‘never happened’, a ‘malicious fabrication’
MOST READ
Man posing as Marcos spox revealed to be an inmate in Bilibid — Guevarra
Heart Evangelista gets a ‘no’ from Chiz Escudero after asking, ‘Do I deserve a bag?’
Congress canvassing of votes for president, VP to begin May 24
3 Iloilo residents found with Omicron subvariant
Don't miss out on the latest news and information.