Duterte: Filipinos may soon be back at Panatag | Global News
Close
menu
search

Duterte: Filipinos may soon be back at Panatag 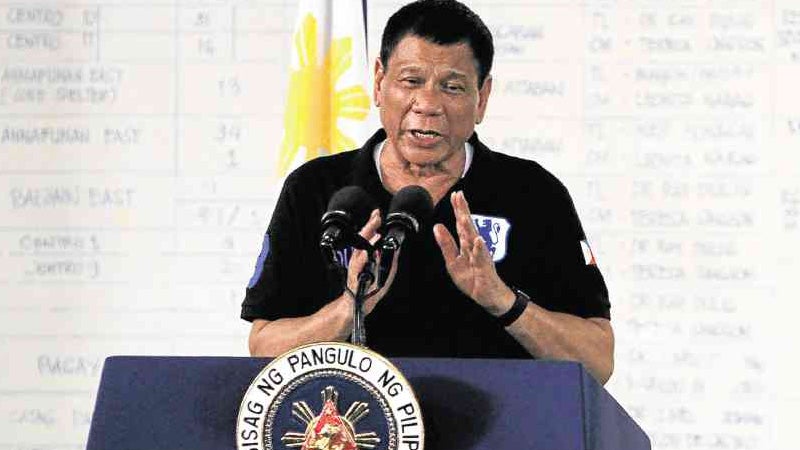 President Rodrigo Duterte on Sunday said he discussed Scarborough Shoal with Chinese leaders during his four-day trip to Beijing last week, and expressed hope that Filipino fishermen would be able to return to the disputed fishing ground in the West Philippine Sea in the next few days.

In back-to-back speeches in typhoon-hit Cagayan and Isabela provinces, Mr. Duterte said he and Chinese President Xi Jinping had cordial discussions about the maritime dispute and agreed to further talks, although they both stood their ground on each other’s sovereign rights to the waters.

“Let us wait for a few more days, we might be able to go back to Scarborough Shoal,” he said.

It was not immediately clear if that meant China had given an indication it would end its four-year blockade of the rich fishing ground known to Filipinos as Panatag Shoal.

“I’m not sure if they will fulfill [what was discussed],” Mr. Duterte said.

Two Chinese sources with ties to the leadership in Beijing told Reuters last week China would consider giving Philippine fishermen conditional access to disputed waters in the South China Sea after a meeting between Xi and Mr. Duterte.

China seized Panatag Shoal after a two-month standoff with the Philippines in 2012, denying Filipino fishermen access to the fishing ground.

China’s seizure of the shoal forced the Philippines to challenge China’s claim to 90 percent of the South China Sea in the UN-backed Permanent Court of Arbitration in The Hague in 2013.

On July 12, the court ruled that China’s claim had no basis in international law and that it had violated the Philippines’ sovereign rights to fish and explore for resources in waters within its 370-kilometer exclusive economic zone (EEZ) in the South China Sea.

China, which refused to take part in the arbitration, rejected the ruling, saying it would not change anything in the situation in the South China Sea.

It said, however, that it was time for talks again between the countries directly involved in the territorial disputes to reach a peaceful resolution.

Besides China and the Philippines, Brunei, Malaysia, Vietnam and Taiwan have overlapping claims in the South China Sea.

Panatag shoal is located 230 km off the coast of Zambales province, well within the Philippine EEZ, and more than 800 km from Hainan, the closest Chinese landmass.

“China said it’s theirs. I also told them it is ours,” Mr. Duterte said, reporting that he asserted the Philippines’ rights over the shoal.

The Hague ruling did not resolve the question of who owns the shoal, but said it was a common fishing ground open to both Chinese and Filipino fishermen.

Keep out of lagoon

Once they are able to return to Panatag, Filipino fishermen, Mr. Duterte said, should keep out of the lagoon, where fish spawn, to avoid depleting the area’s marine resources.

“Do not gamble or destroy the spawning grounds. That could result in imbalance in our food supply,” Mr. Duterte said.

He said China had also ordered its fishermen to keep out of the lagoon.

Mr. Duterte expounded on the topic in his speech in Isabela, disclosing details of his talks with Xi.

“I told him (Xi) we won the case and we were told that [Scarborough] belongs to us. But anyway, the problem is, he said, ‘That belongs to us historically, and we will not give it up,’” Mr. Duterte said.

“I said I will not fight you because I do not see a positive resolution if it will involve killings. It’s the modern times now, we should avoid conflict. He said, ‘We can resolve this case peacefully, without conflict, without bloodshed, but it will take time,’” Mr. Duterte said.

“And I said, ‘That’s OK, as long as someday, we will continue our talk. One day in the future we will really discuss this. We cannot leave this hanging,’” he said.