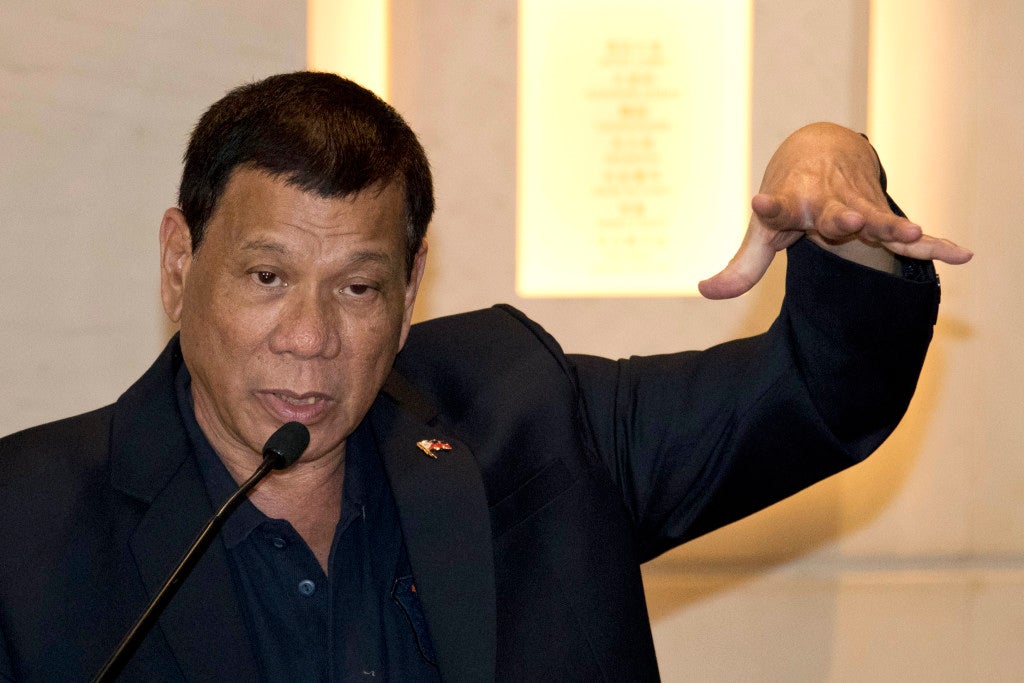 President Rodrigo Duterte speaks during a news conference in Beijing, China, on Oct. 19. Duterte’s effusive message of friendship on his visit to Beijing this week has handed China a public relations bonanza just three months after Beijing suffered a humiliating defeat by an international tribunal. AP

BEIJING—Amid the diplomatic firestorm created by President Rodrigo Duterte after he declared his decision to initiate a “separation” from the United States, members of his Cabinet scrambled to explain and interpret his words to the public, even as businessmen and analysts struggled to understand and come to terms with the Chief Executive’s aggressive words.

On Friday, presidential spokesperson Ernesto Abella sought to downplay Mr. Duterte’s statement, saying it was merely “a restatement of his position on charting an independent foreign policy … that he has repeatedly made in domestic speeches.”

“This is not an intent to renege on our treaties and agreements with our established allies, but an assertion that we are an independent and sovereign nation, now finding common ground with friendly neighbors, with shared aspirations in the spirit of mutual respect, support and cooperation,” he said in a statement.

Abella explained that Mr. Duterte was asserting the imperative to separate the nation from dependence on the US and the West, and to rebalance economic and military relations with our Asian neighbors such as China, Japan and South Korea, as well as the members of the Association of Southeast Asian Nations.

President Communications Secretary Martin Andanar, meanwhile, likened the situation to a young adult moving out of his parents’ house.

“The United States was a father to us for a long time, and it is but timely already for us to move out of that house and secure our own house and decide for ourselves,” he said.

Asked whether the President will move to abrogate the 1951 Mutual Defense Treaty—the cornerstone of a military alliance with the US that obligates each nation to come to the other’s defense during wartime—Mr. Andanar said the issue would be discussed by the Cabinet, as well as Mr. Duterte’s defense and security advisers.

Outside the President’s circle, the view was mixed.

A businessman who joined the trip to three-day state visit to Beijing said Mr. Duterte’s statement “should not be interpreted literally.”

“He just wants to project that he is taking an independent economic and foreign policy,” said Francis Chua who is the chair emeritus of the Philippine Chamber of Commerce and Industry, adding that he does not expect any disruptions on the business and economic front to result from the President’s words.

Ateneo de Manila University lecturer Segundo Romero pointed out that the President, by himself, cannot turn around the country’s foreign policy.

“The foreign policy of the country as it now stands is a result of thousands of battles and skirmishes across seven decades by various stakeholders in government, the private sector and civil society,” he said. “People died for their positions on this issue in insurgencies, student demonstrations in the 1970s, battles and wars.”

Romero explained that national debates raged over the end of the US military bases agreement, the Enhanced Defense Cooperation Agreement with the US, and three Philippine Constitutions since 1935.

“It is naive to think that a single person, even if he were president, can turn this foreign policy either way more than 45 degrees,” he said.

“Even the President’s Cabinet hear, but don’t accept, what this Rip Van Winkle of a President declares,” he added, comparing Mr. Duterte to the main character in an 1800s American short story who falls asleep in the woods and awakes 20 years later to find the world around him changed.

For his part, former Foreign Affairs Secretary Roberto Romulo told the Inquirer that he was “shocked and concerned” about the country’s future.

Romulo, who was the country’s chief diplomat under President Fidel Ramos in the 1990s, said the Mr. Duterte should explain his move to the 60 percent of Filipinos who favor the US over China, and suggested that the President call a referendum before taking the country further down this path.

“Past ambassadors to China warn not to trust China,” he added.

Read Next
Senators seek clarification on Duterte’s foreign policy stance
EDITORS' PICK
Is your company a growth champion? Stand up and be recognized!
New Year, New Rediscoveries
PNP’s Covid-19 cases jump to 9,809; 52 new infections logged
Acer Philippines welcomes you to its first flagship store
Pope Francis to miss events due to new flare up of leg pain—Vatican
More than 150 National Guard in Washington for Biden inauguration test positive for coronavirus
MOST READ
Dustin Poirier knocks out Conor McGregor at UFC 257
Ellen DeGeneres, too, is baffled by viral Filipino soda ad
AFP to apologize to UP alum falsely included in list of NPA members — Lorenzana
Why Kris Aquino sleeps with her pearls
Don't miss out on the latest news and information.