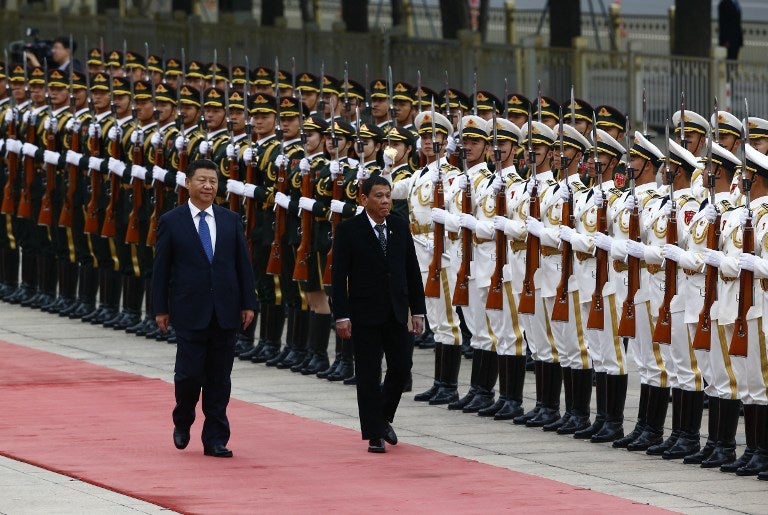 Philippines President Rodrigo Duterte (C) and Chinese President Xi Jinping review the guard of honors as they attend a welcoming ceremony at the Great Hall of the People in Beijing on October 20, 2016. AFP PHOTO / POOL / THOMAS PETER

Magdalo Rep. Gary Alejano has filed a resolution calling for a congressional inquiry in aid of legislation into the conflicting foreign policy statements of President Rodrigo Duterte.

In House Resolution 483, Alejano urged the appropriate committee to review and assess the foreign policy posture of the Duterte administration in order to effectively support Duterte’s bid for an independent foreign policy.

“It is necessary for members of the House of Representatives thru the appropriate House Committee to review, assess and clarify the ‘independent foreign policy’ posture that the current administration wishes to pursue so that it can effectively support the President’s initiatives,” Alejano said in his resolution.

Alejano noted the following instances when the President’s statements contradicted those of his Cabinet Secretaries.

When Duterte said he wanted to review the Enhanced Defense Cooperation Agreement (Edca) with the United States because the deal was not signed by the President himself, Foreign Affairs Secretary Perfecto Yasay said there was no need for a review because the Supreme Court had upheld its legality.

Alejano quoted Duterte as saying it would be a bloody war if China trampled on the sovereign rights of the Philippines over the West Philippine Sea dispute, only to state later on to the Chinese Ambassador that he would be willing to set aside the arbitration decision favoring the Philippines so as not to set back the resumption of bilateral talks.

Duterte in September also said he wanted US troops out of Mindanao, only to clarify that he only wanted to do so for the safety of the troops from Moro insurgents.

The President also announced that the Armed Forces of the Philippines would no longer hold joint patrol activities in the West Philippine Sea for fear that it might anger China, only to be clarified later on by Yasay that the joint patrols will continue in territorial waters not within the exclusive economic zone.

Alejano warned that the President’s unclear foreign policy and conflicting statements took their toll on the Philippine peso, which sank to its lowest amid jitters from foreign investors pulling out cash from the country.

“The conflicting statements and sharp comments of the President against our allies and trade partners may have contributed to the slide of the Philippine peso, which sank to its lowest rate after seven years. His conflicting statements have also eroded the confidence and trust of investors, as they pulled money from the nation’s assets amid concerns about the President’s policies,” Alejano said.

Alejano said a clear foreign policy is vital to sustain the country’s relations with trade partners in the international community.

“The number of conflicting statements made by the President and his Cabinet officials tend to put most Filipinos, their officials, and even their legislators in the dark as to where we are heading based on their differing statements in relation to Philippines’ foreign policy,” Alejano said. JE/rga