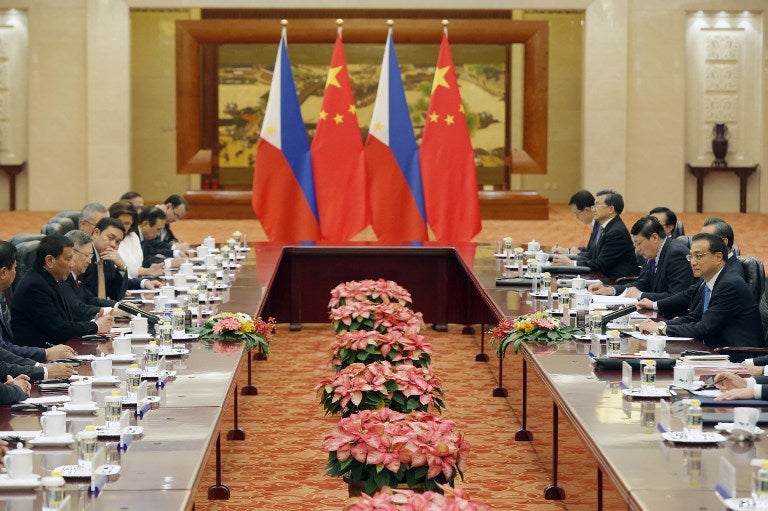 Premier Li Keqiang (right) and President Rodrigo Duterte (left) attend a meeting at the Great Hall of the People in Beijing on Oct. 20. Duterte met with his Chinese counterpart Xi on Oct. 20, state media said, as the Philippine leader seeks closer ties with the Asian giant while blasting his US allies. AFP

BEIJING—The Bank of China will open on Friday a $3 billion credit facility for Philippine industries and infrastructure in a deal to be sealed as the concluding activity of President Rodrigo Duterte’s state visit to the world’s second largest economy.

The Inquirer learned that eight Filipino conglomerates and corporations will enter into an agreement with one of China’s biggest state-owned financial institutions.

Officials at the Filipino firms described the deal as “non-binding.”

“They want to give us a credit line for any use we may have for it,” one company official said. “It will most likely be [loaned out] at market rates.”

The Bank of China will also enter into an agreement with the Department of Trade and Industry and the Philippine Chamber of Commerce and Industry for strategic cooperation on small and medium enterprises.

The state-owned bank will be represented in the signing ceremonies by its chair, Tian Guiling, while the Philippine side will be represented by the CEOs of the respective conglomerates. Also expected to witness the event are Finance Secretary Carlos Dominguez III, Trade Secretary Ramon Lopez, Public Works Secretary Mark Villar, Economic Planning Secretary Ernesto Pernia, Agriculture Secretary Emmanuel Piñol, and Bases Conversion and Development Authority chair Vivencio Dizon, among others.

The signing ceremonies will be held at the Bank of China’s headquarters in Beijing, after which Mr. Duterte will head straight to the Beijing Capital International Airport for his 5 p.m. flight to Davao City. He is expected to arrive in Davao at 10:45 p.m. of Friday.

PH agrees to bilateral talks on maritime row, gets $9B in credit

China: Friendship with PH now back to normal