PH agrees to bilateral talks on maritime row, gets $9B in credit 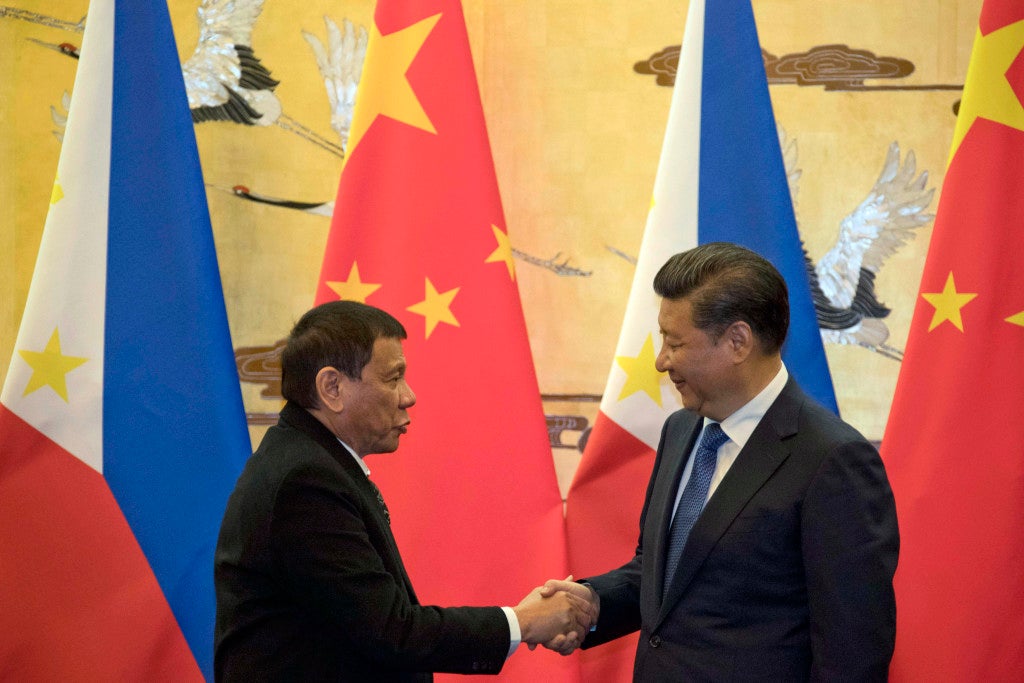 President Rodrigo Duterte and President Xi Jinping shake hands after a signing ceremony in Beijing, China, on Oct. 20. Duterte was meeting Thursday with Xi in Beijing as part of a charm offensive aimed at seeking trade and support from the Asian giant by setting aside a thorny territorial dispute. AP

BEIJING—Beijing scored a major diplomatic coup on Wednesday after Chinese President Xi Jinping and President Rodrigo Duterte agreed to enter into bilateral negotiations to resolve its maritime dispute—a 180-degree turn from the Philippines’ stance of engaging only in multilateral talks over overlapping territorial claims in the West Philippine Sea.

As part of the deal, officials of both nations signed 13 agreements and memoranda of understanding (MOU) that included a key deal to establish a “Joint Coastal Guard Committee on Maritime Cooperation” as a prelude to greater cooperation in the disputed waters.

“In this visit, bilateral relations have fully recovered and two countries will return to track of dialogue and consultation to address maritime issues,” China’s vice minister for foreign affairs Liu Zhenmin told the press after the signing ceremonies witnessed by Messrs. Xi and Duterte.

The Inquirer learned that, during their bilateral talks, Mr. Xi commuted $6 billion worth of soft loans from the Chinese government to the Philippines, while another $3 billion in credit facilities would be made available by private Chinese banks. Another 100 million yuan or about $15 million was committed to aid Mr. Duterte’s war on drugs through the establishment of rehabilitation facilities—details confirmed by both Finance Secretary Carlos Dominguez and Presidential Communications Secretary Martin Andanar.

Other deals signed on Thursday in the Great Hall of the People included the Agricultural Cooperation Action Plan 2017-2019; an MOU on cooperation on animal and plant inspection and quarantine; an MOU on supporting the conduct of feasibility studies for major projects; and an MOU on production capacity and investment cooperation.

Finally, Messrs. Duterte and Xi also witnessed the signing by their Cabinet officials of the MOU on the lists of transportation and infrastructure cooperation projects; and the MOU on financing cooperation between the Export-Import Bank of China and the Philippines’ Department of Finance.

Also agreed upon was an MOU on news information exchange training.

Addressing Mr. Duterte’s concerns over the local drug menace, both nations also signed a protocol on cooperation between the Philippine Drug Enforcement Agency and the Narcotics Control Bureau of the Ministry of Public Security of China.

Speaking to reporters on the sidelines of the signing ceremonies, Rep. Arthur Yap described the bilateral meeting between Messrs. Xi and Duterte as “unprecedented,” saying both leaders spent more time speaking to each other exclusively than originally planned.

“It was just the two of them and their interpreters. No other officials present,” he said, describing the intimate tête-à-tête ahead of the expanded bilateral talks. “That’s really unprecedented. They were supposed to speak for only 15 minutes, but I think it extended to 30 minutes.”

The meetings followed an elaborate welcoming ceremony thrown for Mr. Duterte at the plaza of the Great Hall of the People fronting Tiananmen Square. The national anthems of both nations were played while a battery of howitzers fired a cannonade in Tiananmen Square. After reviewing the honor guard composed of soldiers of the People’s Liberation Army, both leaders were greeted by cheering schoolchildren waving flowers and flags of China and the Philippines.

As both men returned to the dais, the PLA honor guard passed in review to a crisp goose step march while the military band played martial music.

‘Time to say goodbye,’ Duterte tells US during visit to China

China: Friendship with PH now back to normal