CPP calls for probe on violent protest dispersal at US Embassy 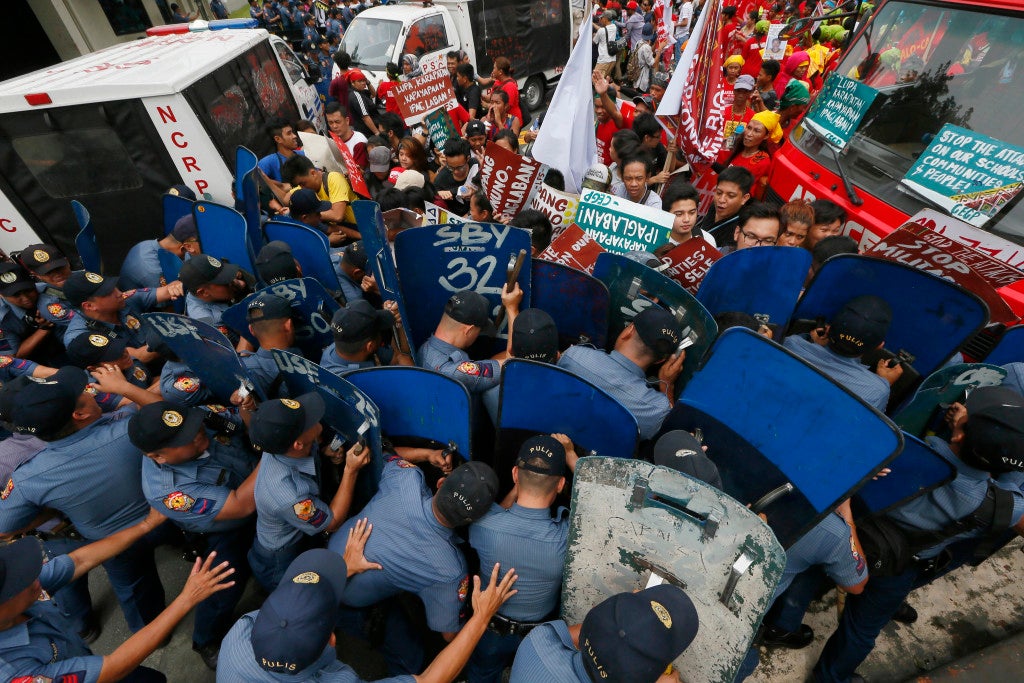 Police and protesters clash during a violent protest outside the US Embassy in Manila on Oct. 19. A police van rammed into protesters, leaving several bloodied. AP

The Communist Party of the Philippines (CPP) on Wednesday condemned the violent dispersal of protesters in front of the United States Embassy in Manila, which left several rallyists injured.

Calling for an investigation of the incident, the CPP said the government should put to task the police officers behind the violent dispersal, which saw a police vehicle running over the protesters.

“The CPP holds the leadership of the Philippine National Police, the Armed Forces of the Philippines and officials of the Duterte government responsible for the violent affront against the people’s democratic rights to demonstrate and seek redress,” the CPP said in a statement.

“That the successive dispersals were carried out with such viciousness reveal the deep-seated hostility against the people and patriotic forces of those police and military officers who ordered the dispersals. These officers must be immediately identified, investigated and put to task,” it added.

Militant leader Renato Reyes said at least 10 were injured while others were arrested following the dispersal.

READ: Police deny running over protesters at US Embassy

Amid a peace negotiation with the Duterte administration, the CPP also called on the National Democratic Front of the Philippines (NDFP) to bring up the incident to the government’s negotiating panel.

“The violent dispersal is a direct violation of the Comprehensive Agreement on Respect for Human Rights and International Humanitarian Law (CARHRIHL). The CPP urges the negotiating panel of the NDFP to raise the matter of the violent dispersal with their GRP counterparts.”

“The CPP supports the demand of the peasants and minority groups for an immediate end to the military occupation of their communities,” the statement added.

Violent dispersal of US Embassy protesters ordered by MPD exec–groups

Youth solon hurt in protest dispersal at US Embassy