Fil-Am champion of tiny homes lives her cause

That’s the size of Vina Lustado’s house. She’s a Filipino-American Ojai resident who owns a firm that specializes in sustainable building and design.

Her house might be small (it’s the size of a trailer), but it’s equipped with everything she needs: a living room; kitchen; bathroom; and a place to sleep up in the loft.

Lustado also enjoys simple luxuries in her tiny space, including a skylight in her loft where she watches the stars and the moon, a fireplace where she sometimes sleeps close to at night, and a kitchen, which is the biggest she’s ever had out of any guesthouses she has stayed in.

Lustado’s tiny house aligns with her value of simple living, which traces back to her roots in Pagbilao, a municipality in Quezon in the Philippines. She moved to the United States with her family when she was seven years old, and while she says she doesn’t remember much about her time there, she does recall having lived simply.

“[I’d go] to the linang quite often and go riding on the mules, walk barefoot to my aunt’s and uncle’s, cook on an open fire, and we’d eat off of banana leaves,” she says. “It was totally linang living. That’s my fondest memory. That’s always stayed with me. That’s something I guess I always craved for, that real down to basics living, because that’s all I remember in the Philippines.”

Since moving to the United States with her family, Lustado says she was always living in tiny spaces. When they first moved to America, the 12 of them lived in a one-bedroom unit in a duplex. Lustado says she essentially lived in the closet, and in a few instances, she slept in the bathtub and on the sofa.

“I was used to having small spaces and not having much,” she says. 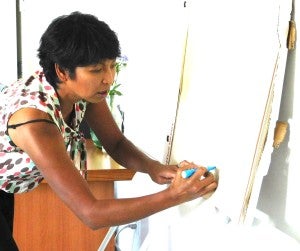 Vina conducts a session at a workshop about tiny houses held on Oct. 1 and 2 in Ojai, California. AGNES CONSTANTE

Even in her college years, Lustado was frequently relocating between apartments, small dorms and guesthouses. “I think the Philippines stayed with me because I always wanted to live simply,” she said.

That value of simple living is reflected not only in Lustado’s house, but also in the design firm she started in 2009. The company, Soul Haus Design, was born after her more than 20 years of dealing with high-end corporate clients at multiple firms throughout her career. Most of the projects she worked on during that time were big and expensive. More importantly, they left large environmental footprints, something that went against Lustado’s values.

“My values were always about minimizing your natural resources so that you use less, having a small footprint so that it doesn’t require a lot of energy, minimizing your utility bills, being able to not go into debt,” she explains.

Sol Haus focuses on smaller scale projects and caters to clients who may not be wealthy and are environmentally focused.

Her own house, which she began conceptualizing three years into her business, ended up becoming a project that reflected Sol Haus: She re-used a number of materials including her doors, which were purchased from Craigslist; the windows, which came from Craisglist and Habitat Restore. Her flooring was also re-used, and while it had to be re-milled and re-sanded, it was free.

She designed her house herself, and altogether, it cost $40,000 to build.

Lustado’s house is also off the grid because it runs on solar power; a propane tank fuels her fireplace and stove and heats her water. She does get water from the city – the only utility she pays for – and has a composting toilet that’s connected to the city’s septic system.

For the work she’s done in her field, Lustado was recognized as one of the 100 Most Influential Filipinas in the World in 2015 by the Filipina Women’s Network under the innovators and thought leaders category. The network recognizes women of Philippine ancestry who influence the face of leadership in the global workplace, according to its website. 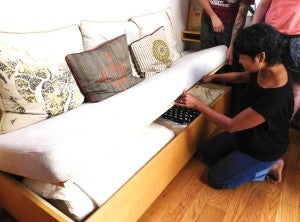 Among other awardees recognized by the network are international Filipinas who are CEOs and presidents of companies, judges, professors and filmmakers.

“They’re amazingly exceptional women so I was shocked and honored [to receive the award] because they’re very accomplished and [from] all over the world,” Lustado said.

In addition to her work in sustainable architecture, Lustado is a proponent of tiny houses, which fall into a gray area as far as legality goes because ordinances vary from city to city regarding the size requirements for homes and where tiny houses can be parked.

Apart from working for her own business, Lustado spends much time working with the Tiny House Collaborative, a group that provides education and outreach across the United States on tiny houses.

Lustado is based in Southern California, calls Ojai her home and supports tiny houses in the United States. She also thinks the small-house option would be a huge benefit to the country that used to be her home as a child.

“My dream is to bring tiny houses to the Philippines because that’s where I’m from,” Lustado says.