The Philippines and Brunei have reaffirmed their commitment to maintain good relations as they seek to boost economic ties through stronger cooperation in the energy sector and the development of halal products following President Duterte’s three-day state visit to the country.

Mr. Duterte got a warm welcome from Sultan Hassanal Bolkiah, who lauded his economic achievements as Davao City mayor and said he expected the President to replicate his success in the rest of the nation.

The two leaders also affirmed their commitment to maintain the excellent bilateral and diplomatic relations between their countries.

“We in Brunei admire your personal achievements as the mayor of Davao in making the city business-friendly and attaining impressive economic growth,” Bolkiah said in his remarks during a state banquet he hosted for Mr. Duterte on Monday.

“I am confident that under your leadership, Davao’s success will be replicated throughout the Philippines and bring inclusive growth to your people,” the sultan added.

He expressed appreciation for the work of 23,000 Filipinos in Brunei, most of them teachers, health professionals and engineers.

Bolkiah also said there were more opportunities for the Philippines and Brunei to boost economic ties.

“Today, there remains much potential to be tapped in our economic cooperation,” he said. “This includes strengthening our work in the energy sector, as well as exploring new areas in the halal industries.”

Bolkiah took note of the good defense cooperation between the Philippines and Brunei, which recently sent a monitoring team to Mindanao for the peace talks, and praised the President for his peace efforts.

“Your personal commitment toward this endeavor is very much appreciated, as it contributes to overall regional security,” he said.

Mr. Duterte, in his message during the banquet, thanked Bolkiah for ensuring excellent relations between Brunei and the Philippines at the policy and personal level.

The two countries, he said, would continue to work together for greater peace, progress and prosperity.

“In store for us are many opportunities to further strengthen our partnership—in trade and investments, in politico-security cooperation, in the peaceful settlement of disputes, in bringing just and lasting peace to Mindanao, and in building a stronger Asean,” the President said.

The Philippines and Brunei could count on each other to pursue shared objectives, he said. 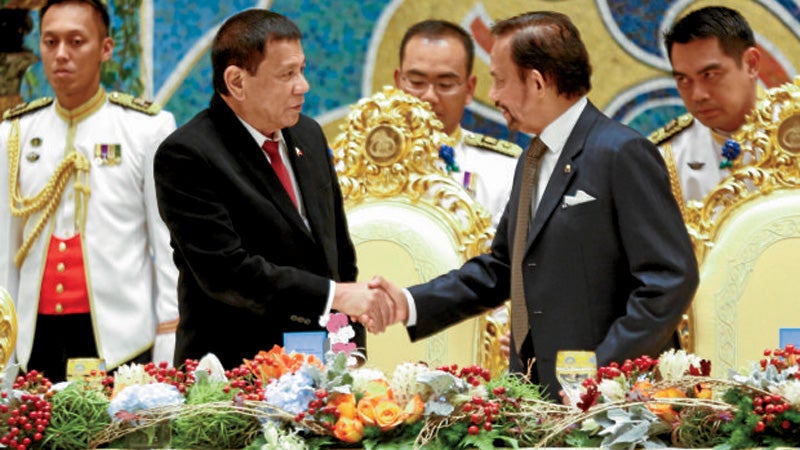 “Above all, we must continue to view each other with the respect, mutual trust and confidence that have defined the Philippines-Brunei relations for the past 32 years,” he said.

Mr. Duterte also thanked the sultan for taking care of the Filipino community in Brunei and for assisting the Philippines during calamities.

“In our case, we have several manufacturing activities that Brunei can take advantage of with respect to agribusiness, investing in tourism, resorts,” Lopez said.

Brunei could consider bringing energy and power to the country, in partnership with local businessmen, he said.

On the development of products to tap into the $2-trillion halal world market, the trade secretary noted Brunei’s expertise in certifying these kinds of products.

The Philippines has its own certification, but it needs the credibility of the certification procedure in order to export halal products, he said.

Lopez said there had been a good discussion between the Philippines and Brunei in terms of cooperation in developing better certification quality and credibility.

Mr. Duterte left Brunei on Tuesday and flew to China for a four-day state visit. —LEILA B. SALAVERRIA