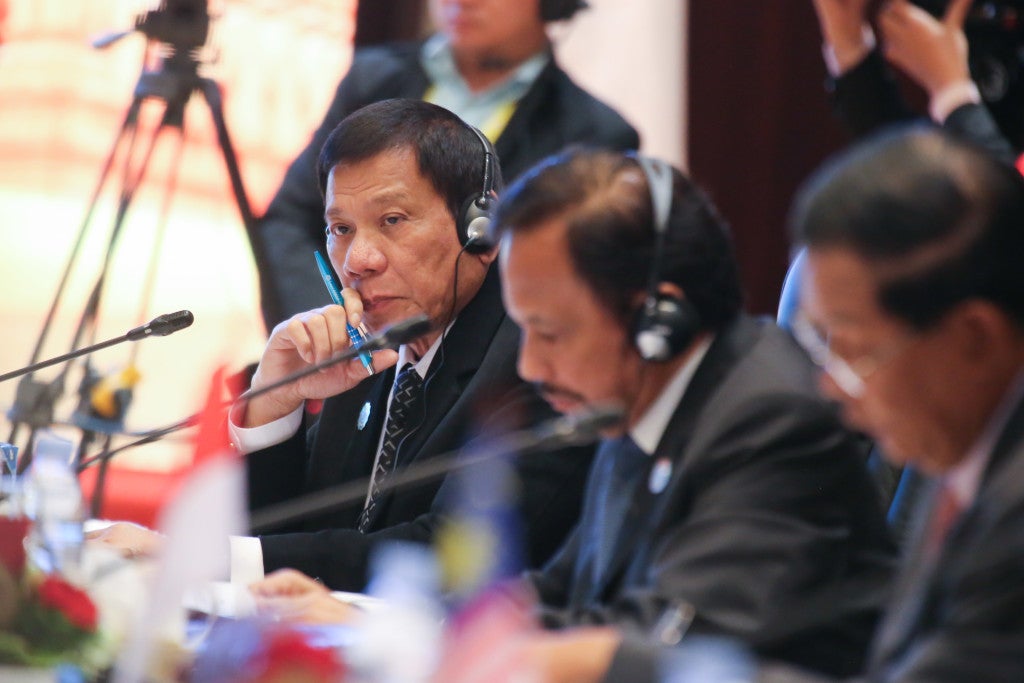 President Rodrigo R. Duterte at the ASEAN Summit at the National Convention Center in Vientiane, Laos on September 7. KING RODRIGUEZ/PPD

BEIJING — About a thousand top-level businessmen from the Philippines and China are expected to attend Thursday’s much-anticipated business forum with President Rodrigo Duterte, who seeks to repair bilateral ties, which deteriorated in the last five years due to territorial disputes.

Based on Philippine embassy estimates, the number of delegates from China could swell to 600.

“I see excitement from both sides, and also from our business sector as we warm up relationship with China,” Lopez said.

“China is a natural business partner as there’s connection historically (alongside) trading relationship and family ties over the years,” he added.

The Philippine-China Trade and Investment Forum will be held on Thursday afternoon at the Great Hall of the People. This is also where the President will have bilateral meetings with Chinese Premier Li Keqiang and Zhang Deijiang, chair of the standing committee of National People’s Congress.

Several bilateral agreements and private sector deals are expected to be signed during this historic state visit, which is closely watched by international observers given its impact on geopolitical dynamics in the region.

“President Duterte is bridging a sea of friendship and breaking the sea of barrier. He is bringing back peace and fair commerce and movement of people, bringing back smooth harmony in the region around us which was present in historic times until colonialism came in,” Lopez said.

Lopez said this visit would promote “peace and friendship in the region” and present the Philippines as “a free sovereign nation, strong leadership, a friend to all, enemy of no one.”

Mr. Duterte’s pivot to China comes at a time that diplomatic relations with the US have come under strain.

The last time that a business forum with the Philippine head of state was in 2011 under the term of President Benigno Aquino III. The forum likewise attracted a huge crowd of Philippine and Chinese businessmen but in the following years, bilateral ties deteriorated due to maritime dispute. Recently, a UN Tribunal upheld the Philippines’ maritime rights in disputed territories.

The “One China” policy is the governing principle in Philippine relations with China.  SFM