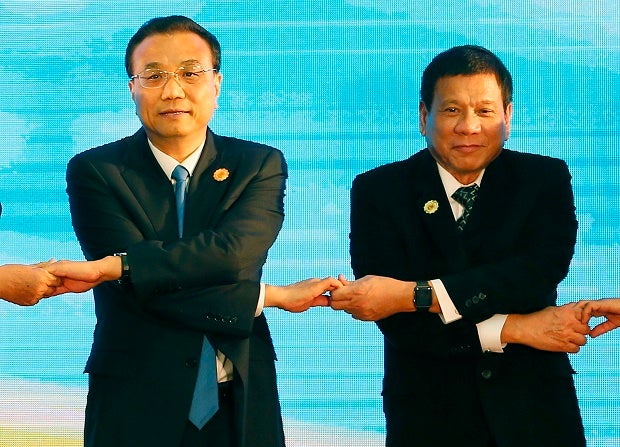 In this Sept. 7, 2016 file photo, Chinese Prime Minister Li Keqiang, left, and Philippine President Rodrigo Duterte link arms during the ASEAN Plus Three summit in the 28th and 29th ASEAN Summits and other related summits at the National Convention Center in Vientiane, Laos. After lashing out at longtime ally America, the new Philippine president is making a state visit to China in a charm offensive that will help define how far he wants to shift allegiance from treaty ally the US to an Asian superpower locked in a territorial standoff with his small, impoverished country. AP FILE PHOTO

MANILA — Malacañang has left it to the Department of National Defense and Department of Foreign Affairs to sort out President Rodrigo Duterte’s plan to hold war games with China and Russia.

“If the President is interested and the official diplomatic communications will push through, then I guess the DFA would be the right department to comment on that and of course, the Department of National Defense,” said Communications Assistant Secretary Marie Banaag in a briefing on Tuesday.

Mr. Duterte said in a television interview that he has been seriously considering holding military drills with China and Russia. “Yes, I will. I have given enough time for the Americans to play with the Filipino
soldiers,” said Mr. Duterte.

He reiterated his previous declarations that the recent war games with the United States would be the last under his term.  SFM