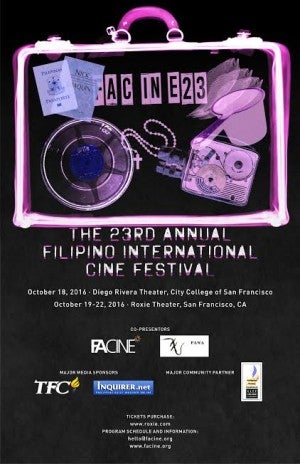 Closing the festival will be San Francisco’s own Matthew Abaya’s “Vampariah,” a horror adventure film about Philippine mythical aswang (female vampire that appears as segmented creature) on Saturday, Oct. 22, at 9:00 p.m.

Co-presented with the Philippine American Writers and Artists, Inc. (PAWA) and sponsored by The Filipino Channel (TFC) and INQUIRER.net, FACINE’s opening ceremony is on Oc.18 at the Diego Rivera Theater, City College of San Francisco with a lecture by Prof. Joel David, FACINE Gawad Lingap Sining honoree. 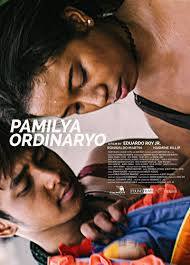 The annual festival, the longest running in the US, has been the premier showcase for new works and Filipino film classics in the United States for the past 23 years. It is organized by FACINE, a not-for-profit media arts organization based in San Francisco that aims to “advance the interests of cinemas from the Philippines and the Filipino diaspora.”

Preceded by screening of Inshallah Montero’s THE LITTLE READER

A young man develops a close relationship with an old poet, a coming-of-age tale, a tribute to a forgotten art (Pampango poetry) and an ode to a great culture. 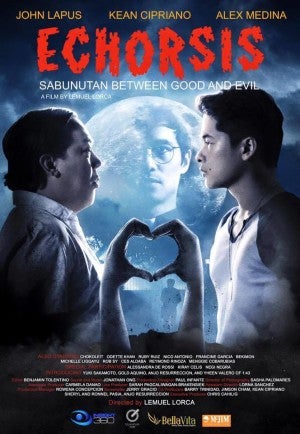 A gigolo is possessed by a gay entity after he deceives a closeted gay lover; a priest is tasked to exorcise the spirit out of him.

1:30 pm – TRIP TO HAPPY-FUL: A collection of shorts on finding joy in the now and then:
ASWE [the fine-toothed comb], Directed by Russel Renz Sobrino, written by Josephine Santos (18 min, in Kapampangan with English subtitles, Philippines, 2015) Narrative short

An out of work comedian finds a machine capable of recording ideas, taking us on a journey through his mind.
IT RUNS IN THE FAMILY. Directed and written by Joella Cabalu (45 min, OUTtv/Meaningful Films, Canada, 2015). Documentary.

A young gay Filipino Canadian travels from Canada to the Philippines to meet his other queer relatives, how their lives resonated to their Catholic upbringing and family. 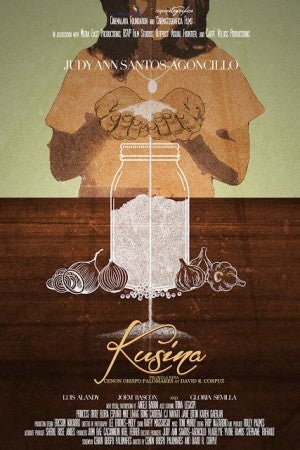 Her kitchen is one silent witness to the life and times of Juanita, her sanctuary where she creates dishes for her family, her friends and even, her enemies and strangers.

Mahal is a part of an elite squad of skilled hunters responsible for keeping the world safe from vampires and other creatures of the night.

Read Next
Free airfare, stay in Palawan for lucky Manila FAME buyer
EDITORS' PICK
Nograles: Cabinet members to donate 75% of monthly salary to aid COVID-19 fight
Quick chat with Nicole Andersson: ‘You really don’t need much to be happy’
IATF to LGUs: Issue ordinances vs attacks on frontliners, COVID-19 patients
Diokno to Duterte: OK to make fun of buck tooth, but focus on people’s needs first
Robredo spox thanks Duterte for defending VP’s efforts vs COVID-19
10 Filipinos positive for COVID-19 in UK, 7 in Ireland — envoy
MOST READ
Gov’t mulling quarantine period extension of 15-20 more days
Sotto on Isko Moreno’s call: We do our job without the media following our every move
ADB warns PH against prolonged lockdown
Cook more and eat less: Tips on your quarantine diet
Don't miss out on the latest news and information.