Duterte vows ‘no bargaining of territories’ in China visit

DAVAO CITY – President Duterte said there will no bargaining of territories in his scheduled talks with China, allaying fears that the Philippines may lose some of the gains it has earned from the international tribunal ruling on the contested territory.

“We will speak softly but we will not bargain anything,” the President told the media during a pre-departure briefing Sunday afternoon.

The President left for state visits to Brunei and China.

“We will continue to insist that it is ours and the international tribunal decision will be taken up but there will be no hard imposition,” the President said.

Mr. Duterte said he will be “very careful” that no bargaining of territories will happen during his talks with Chinese officials, saying he is mindful that the West Philippines Sea remains to be a special area of concern for the Philippines.

“It will remain a special concern and I will be very careful not to bargain anything because after all, I cannot give what is not mine and it is something I am not empowered to do,” he said.

Duterte, who left Davao City shortly after the briefing, was expected to arrive in Brunei Darussalam at 6 p.m. Sunday and attend a get-together of the Filipino community at the Hassanal Bolkiah National Sports Complex indoor stadium an hour and a half later. He is set to meet the Brunei King Sultan Haji Hassanal Bolkiah during his three-day visit to that Southeast Asian country, after which he will fly to his first state visit to the People’s Republic of China. 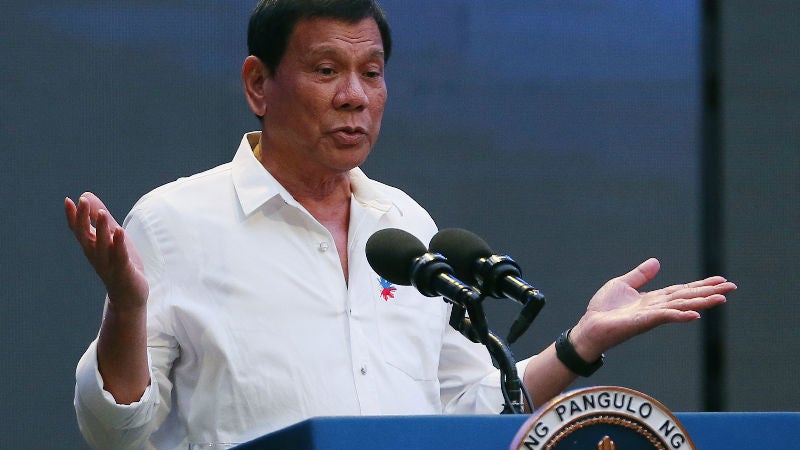 He said he will also thank the Filipino community in Brunei for their contributions to socio-economic well being at home and to apprise them of developments in the country.

In Brunei, Duterte said, he will seek “mutual” support in the campaign against illegal drugs, which he said will be an important step in attaining the goal of an Asean drug-free community.

He said they will also discuss ways to enhance special ties and reaffirm enduring relations within the country and the people.

“I will seek to foster closer cooperation especially in the context of Asean,” he said.

“Among the priorities will be intensifying two-way trade and investments. Developing our halal sector and small and medium enterprises are key points of discussion,” he said.

Mr. Duterte also said that along with growth and development, he will also seek to strengthen joint resolve in securing just and lasting peace in Mindanao. “Brunei has been a steadfast partner for peace. As the Philippines enters into important phases in our peace talks, Brunei will continue to play an important role.”

After Brunei, the President will proceed to the People’s Republic of China where he will meet President Xi Jinping, Premier Li Keqiang and the National People’s Congress Chair Zhang Dejiang.

“This is the first state visit of a Philippine President to Beijing since 2011 and signals a key turning point in both our histories,” he said.

“I look forward to renewing the ties of friendship between the Philippines and China to reaffirm the commitment to work closer to achieve shared goals for our countries and peoples. I look forward to exchanging views with the leaders of China on how to further improve our bilateral relations,” he said.

“We can identify emerging areas of partnership and various field s of cooperation.,” the President added.

He said that in both state visits, he will continue to espouse cooperation and collaboration with friendly nations on the basis of sovereign equality, non interference and mutual respect.

“In all my dealings, I will remain true to the constitutional mandate reposed on me to pursue an independent foreign policy and uphold the national interest of the Philippines,” Duterte said./rga