DAVAO CITY—President Duterte on Sunday said there would be no bargaining of territory in his talks with China’s leaders this week, allaying fears that the Philippines may lose some of the gains it has earned in the international tribunal ruling over disputed areas in the West Philippine Sea.

“We will speak softly but we will not bargain anything,” the President told the media at a briefing before he left for state visits to Brunei and China.

“We will continue to insist that it is ours and the international tribunal decision will be taken up but there will be no hard imposition,” the President said.

Mr. Duterte acknowledged some concerns in the Philippines that his rapid moves to forge close ties with China could affect the country’s maritime sovereignty, but he said that would not happen.

The award by the UN-backed Permanent Court of Arbitration in The Hague dealt a blow to China’s extensive claims in the South China Sea. China has refused to recognize the case.

Mr. Duterte said he was mindful that the West Philippines Sea was a special area of concern for the Philippines.

“I will be very careful not to bargain anything because after all, I cannot give what is not mine and it is something I am not empowered to do,” he said.

Senior Associate Justice Antonio Carpio earlier warned President Duterte that China may ask the country to concede rights in the South China Sea before agreeing to any deals or joint exploration projects. 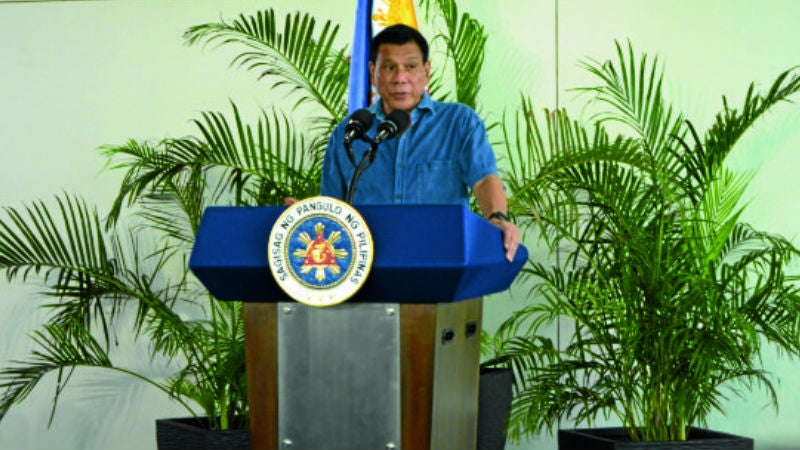 PREDEPARTURE BRIEFING President Duterte briefs journalists on his agenda in going to Brunei and China at the airport’s departure area in Davao City. —GERMELINA LACORTE

He said that this had always been China’s position, but stressed that the President could not concede sovereignty.

Ramos was the President’s special envoy to China.

Mr. Duterte attended a get-together of the Filipino community at Hassanal Bolkiah National Sports Complex, after he arrived in Brunei on Sunday night.

He is set to meet the Brunei Sultan Hassanal Bolkiah during his three-day visit to that Southeast Asian country, after which he will make his first state visit to China.