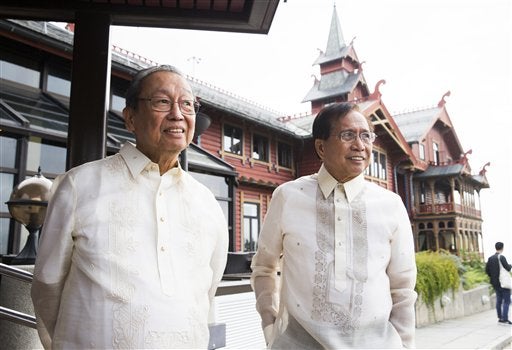 In this file photo dated Aug. 22, 2016, at the start of Philippine peace negotiations hosted by Norway government, in Oslo, Jose Maria Sison of National Democratic Front of the Philippines, left, and Philippine peace minister Jesus Dureza pose for a photograph. Norwegian officials opened a new round of peace talks between the government of Philippine President Rodrigo Duterte and communist rebel members of the NDFP aimed at ending one of Asia’s longest-running rebellions that have killed an estimated 150,000 people. (Berit Roald / NTB scanpix via AP)

OSLO — After four days of marathon discussions, late night meetings, breaks and even delays, the negotiators of the Philippine government and the National Democratic Front of the Philippines concluded the second round of talks with the same warm atmosphere and many gains in the process.

Both parties signed a six-page document entitled Joint Statement on the Second Round of Talks Between the GRP (Government of the Republic of the Philippines) and the NDFP.

In the joint statement, the Philippine government and the NDFP agreed on three points, specifically on the release of detained political consultants, amnesty proclamation and the schedule and venue of the next meeting.

A bilateral ceasefire agreement could happen within the month if the release of the political prisoners would push through, Presidential Peace Adviser Jesus Dureza said.

The government proposed that the signing of the bilateral ceasefire agreement be done in Davao City with President Duterte present, Dureza added.

“The most essential success that has been achieved is the agreement on common outlines of prospective comprehensive agreements on social and economic reforms, political and constitutional reforms and the end of hostilities and disposition of forces,” said Jose Maria Sison, Communist Party of the Philippines founding chair and senior political consultant of the NDFP.

Presidential Peace Adviser Jesus Dureza considered the results of the second round of talks a big achievement in the journey to achieve lasting peace in the country.

“The second round of talks is a giant step forward in the peace negotiations — moving from a mere joint statement to the actual exchange of drafts for each of the Reciprocal Working Committees on Socio-Economic Reforms, Political and Constitutional Reforms, End of Hostilities and Disposition of Forces, including the Ceasefire and Joint Monitoring Committee,” Dureza said.

Dureza expressed optimism that the agreed outline and framework would further give a boost in the acceleration of the talks.

“The agreed common outlines will now give the framework of the future peace agreement, which we hope to sign over the next couple of months,” Dureza said.

The Philippine government promised to work on the release of the remaining political prisoners, which the NDFP welcomed.

A bilateral ceasefire agreement is expected within the month if the release of the political prisoners will push through.

The government proposed that the signing of the bilateral ceasefire agreement be done in Davao City with President Duterte present.  SFM