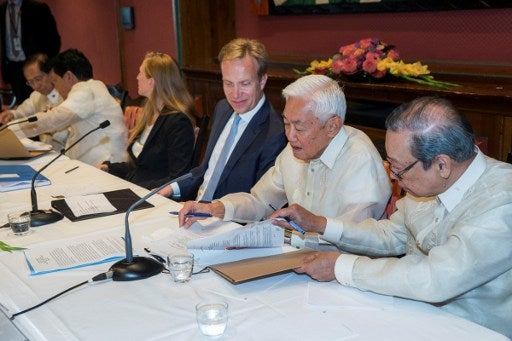 FILE- Phillipines Presidential Peace Adviser Jesus Dureza (R) and then- Chairman of the National Democratic Front of Philippines  Luis Jalandori (C) sign a joint declaration next to the Norwegian Minister of Foreign Affairs Boerge Brende (L) in which both parties undertake unilateral ceasefires without time constraints on August 26, 2016 in Oslo, Norway. AFP PHOTO

OSLO – After a delay in the discussions, both the government and the National Democratic Front of the Philippines finally reached an agreement in crafting a common draft framework and outline for the Comprehensive Agreement on Social and Economic Reforms (CASER).

Julie De Lima, chairperson of the NDFP-Reciprocal Working Committee-SER, earlier said that the outline “should be based on addressing the roots of the armed conflict while the GRP wants an outcomes-based outline.”

“We have exchanged with the GRP an outline of a comprehensive drafte on social and economic reforms that includes agrarian reform, national industrialization, environmental protection, rights of the working people, foreign economic and trade relations, and, monetary and fiscal policies,” De Lima said.

The government prepared a 9-point outcome and proposed that it be included in the Part 1 or Declaration of Principles of the agreement.

After a series of discussions and back channelling following the break, both parties were able to make concessions and craft the common draft.

Instead of including it on Part 1, the points prepared by the government were accommodated as Part 3 or Desired Outcomes.

“The Parties forge this comprehensive agreement on social and economic reforms with the overall objective of eradicating Philippine poverty and reducing inequality in all their aspects and dimensions to have productive, decent and dignified lives,” the common draft said.

The “desired outcomes” include:

The entire common draft CASER framework and outline has 15 parts including the Declaration of Principles; Bases, Scope and Applicability; and the Desired Outcomes.

Considered by the NDF as the “meat of the process” and by the government as the “heart and soul of the talks,” CASER is expected to address the root causes of the conflict and to improve significantly the quality of life of the Filipino people./rga

Read Next
Asia faces challenge to provide power to millions
EDITORS' PICK
Pagasa: Warm, sunny Sunday in most parts of PH
Is it safe to talk politics again at family gatherings? ‘The Reconciliation Dinner’ shows us what that’s like
House energy committee chair Arroyo bats for cheap electricity
EDITORIAL: To a bike-friendly future
The Best Tech Gifts For The 2022 Holidays
vivo’s coming to town to grant wishes with more holiday promos
MOST READ
LOOK: Vhong Navarro transferred to BJMP detention facility in Taguig
The Elephant Man in the Senate
Posh village as ‘shabu’ haven
LOOK: Zanjoe Marudo bonds with Ria Atayde, her family
Don't miss out on the latest news and information.