US Embassy: We are still here to help 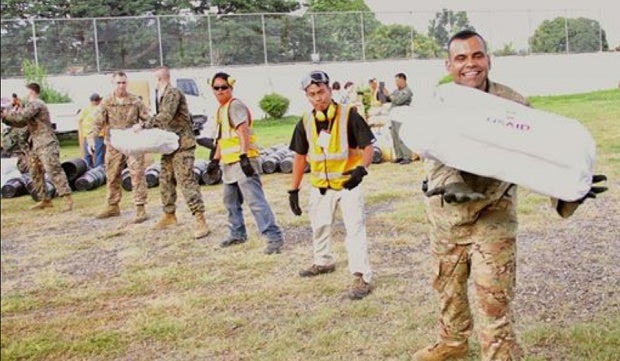 The United States Embassy in Manila posted on Facebook old photos of its relief operations in Zamboanga siege in 2013.

“Remember when the US military and USAID Philippines distributed a total of 10,000 units of bottled water, sleeping mats, blankets, tooth brushes, toothpaste, buckets, and canned goods to provide relief and emergency to internally displaced persons (IDPs) in Zamboanga City in 2013 We were here to help. We are still here to help,” the embassy said in the caption along with the photos that were posted on Friday.

A few days after the month-long Zamboanga siege started on September 9, 2013, the US  provided P26.4 million (US$600,000) worth of assistance to thousands affected by the conflict.

They also helped set up portable toilets, and the procurement of 1,500 water buckets and four 500-gallon water tanks to ensure better sanitation and access to water for displaced residents.

On Thursday, the embassy also posted its relief operations in the aftermath of Supertyphoon Yolanda in November 2013.

“Members of the U.S. Marines are one of the first to respond with relief supplies immediately after Typhoon Yolanda struck the Philippines on November. From building houses and schools, to first aid training in the Filipino community, military exercises like the ongoing PHIBLEX 33 also include community assistance programs to ensure Filipinos have the resources and skills to respond to real-world disasters,” the post said, which had a hashtag #FriendsPartnersAllies.

The posts came amid President Rodrigo Duterte’s tirades against the US.

Early this week, Duterte lashed out at US President Barack Obama and told him to go to hell in one of his speeches.

He also threatened to call off the Enhanced Defense Cooperation Agreement between the US and the Philippines.

Duterte also earlier warned to remove the presence of American troops in the Philippines, and that there would be no more joint war games between the two countries. RAM/rga

Read Next
Filipino designer in Kuwait to debut in Phoenix Fashion Week
EDITORS' PICK
Leveling up your ‘lutong bahay’ with the kitchen companion you never knew you needed
LIST: What to expect in areas under GCQ, MGCQ
Notice of 2020 regular meeting of stockholders June 18, 2020
PNP to maintain checkpoints during GCQ to ensure compliance to health protocols
DOTr bares 2 phases of public transport revival in GCQ areas
SM prepares for ‘safe malling’
MOST READ
LIST: What to expect in areas under GCQ, MGCQ
DOH explains: Only 109 of record-high 539 COVID-19 patients were ‘fresh cases’
Duterte approves Metro Manila’s shift to GCQ starting June 1
Bocaue Mayor Joni Villanueva passes away, Sen. Villanueva confirms
Don't miss out on the latest news and information.