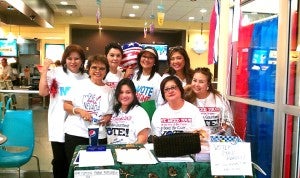 LOS ANGELES – Filipino American voters are leaning left this election, with more than half favoring Democrat Hillary Clinton over Republican Donald Trump, according to a new survey.

New voter trends, patterns of civic engagement, as well as political concerns of Asian Americans are being revealed by the survey, including telling data about the Filipino American community’s political leanings.

The telephone poll was conducted from August to September of this year, and surveyed about 1,694 registered voters in 11 different Asian languages, with the data weighed by ethnicity, gender, and age. A total of 201 Filipino Americans participated, the third largest origin after Chinese and Asian Indians surveyed.

“Asian American Voices in 2016 Election” was a nonpartisan, scientific effort to poll registered Asian American and Pacific Islander voters on issues of civic engagement, according to Karthick Ramakrishnan, who directed the survey.

Partnering with community organizations like APIAVote, the survey’s goal was to address the “pressing need for Asian American voter outreach, especially with the continued lack of contact by political parties and candidates,” Ramakrishnan explained.

Since 2000, the number of AAPI eligible voters has grown by more than 1.2 million in each presidential cycle, the survey reported.

It also found that a majority of Asian Americans (2-to-1 average) self-identifies as Democrat (about 41%), more than twice as many who identify as Republican (16%). Even those who did not identify with an official party leaned left (16% vs. 7% leaning right).

The poll also included data for millennials (35 and under) and women, who were overwhelmingly more likely to identify as Democrats.

Among Filipino Americans, 41% identify as Democrats, 25% Republican, while 31% claimed to be nonpartisan. Up to 32% of Filipinos surveyed said they also found the Republican Party “very unfavorable,” while 14% claimed full support.

With regards to this year’s presidential candidates, Hillary Clinton held a 41-point lead over business mogul Donald Trump among voters heading to the polls this November.

“The poll also showed that Clinton had an advantage of 70% to Trump’s 20%, with 10% support going to other candidates including Jill Stein and Gary Johnson,” Ramakrishnan said.

Roughly 49% of registered Filipino American voters view Trump very negatively (67% of Asian Americans overall not in favor of Trump—higher than the national average of 53%). Broken down by gender, age gap and native vs. foreign-born immigrants, the overwhelming majority do not support Trump for president.

Former Secretary of State Clinton is viewed much more favorably, with 59% of total Asian American surveyed viewing her favorably, and 36% not favorablhy. An average of 64% of Filipinos view Clinton as either “somewhat or very favorable.”

“Asian American women voters also seem to be more enthusiastic for Clinton, as opposed to men,” said Taeku Lee, an investigator in the poll.

Looking at the data from the June primaries, a majority of Asian American voters (53%) were in favor of Clinton, while only 15 % voted for Trump, and 22% supported Democratic candidate Bernie Sanders. Among Filipinos, 45% voted for

“Trump’s support is greatest among Filipinos who voted in the primaries and caucuses, but it still lags overwhelmingly behind Clinton’s support,” Lee continued.

According to the data, about 30% of Filipinos voted for Trump in the June primary.

The survey also found that 1 out of 8 Asian Americans who identify as Republican would prefer to vote for Clinton, rather than their own party’s candidate. Asian Americans who also identified with a religion also generally support Clinton over Trump (77% to 23% margin).

Even among nonpartisan and Independent voters, Clinton outpolls Trump by nearly a 4 to 1 margin.

“After taking into account undecideds who lean toward each candidate, we project an Election Day Clinton advantage over Trump of 70% to 20%, with 10% for other candidates,” the NAAS reported.

The survey also looked specifically at Asian Americans’ views on specific issues that matter to them.

While immigration, jobs/the economy, and terrorism/national security rank highest among issues of concern for Asian American voters, other issues that matter include health care, education and racism; 23% of milennials expressed racial discrimination as one of the most important problems in the U.S.

“We need to go beyond the stereotype that Asian Americans only care about education and the economy, and look at other areas of life that they strongly care about,” said principal investigator Janelle Wong.

While the majority (65% of Filipinos, 62% overall) rejects banning Muslims from entering the U.S., there is an interesting split on accepting Syrian refugees.

In contrast to their clear opposition to a Muslim ban, Asian voters are split, with 44% in support (36% of Filipinos) and 35% opposed (41% of Filipinos), the data reported.

Other issues surveyed include climate change policy and equal rights for African Americans (all Asian Americans, including Filipino Americans, overwhelmingly in favor).

Asian Americans continue to view ethnic media as an important, trustworthy source of political information, along with the work of community organizations, the Internet and social media. More than 50% of Asian Americans are also politically influenced by family, friends and peers.

Most Filipinos (81%) get their election news from mainstream media, 7% from ethnic media and 12% from both sources.

However, there is a pressing need for voter outreach to the community, especially in key battleground states—like Nevada, Arizona, North Carolina, Georgia, Florida and California—where the Asian American demographic is continuously growing.

Only 30% of Asian American registered voters report being contacted by either of the parties.

“Community organizations and leaders are still doing a bulk of the work in reaching out and mobilizing our voters,” said APIAVote Executive Director Christine Chen in a press call.

In its findings, APIAVote suggested that eligible Asian Americans are becoming more and more politically active this election cycle.

“We need to get out the vote to our community…get people to think of how they’re going to vote either early, or on Election Day,” Chen added. “Having direct conversation with your family members, to encourage their vote, is more effective in getting them to participate.”