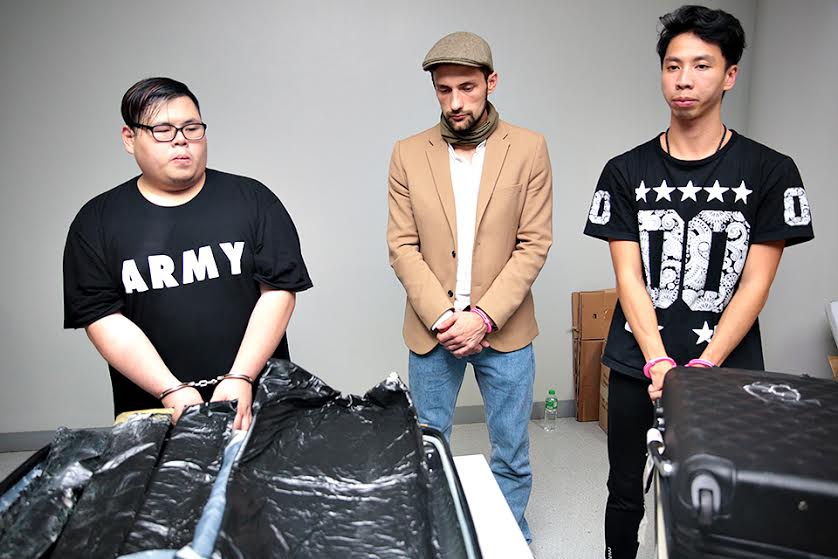 Russian Kirdyushkin Yuri (center) and Hong Kong nationals Chan Kawai and Pau Homanevan, were arrested at the Ninoy Aquino International Airport, on Oct. 5, 2016, after P135 million worth of cocaine and shabu were found inside their luggage. (PHOTO BY MIAA Media Affairs Division)

Update:  This update contains a correction that the three foreign nationals had nearly 28 kilos of cocaine in their baggage, not only 19 kilos of cocaine and shabu as previously reported.-Ed)

Oct. 5, 2016/2047 MANILA — Operatives of the Philippine Drug Enforcement Agency (PDEA) and the Bureau of Customs (BOC) intercepted at the country’s premier airport on Wednesday afternoon three foreigners allegedly trying to smuggle into the country some P135-million worth of cocaine in their baggage.

Macabeo said the three who originally came from Brazil and travelled to Manila via Dubai tried to slip through with nearly 28 kilograms of suspected cocaine in their luggage.

Before the suspects were intercepted, the anti-illegal drugs task force at the NAIA was tipped off about the possible arrival of a sizeable amount of narcotics through foreign drug couriers.

The foreigners, who arrived at around 4:30 p.m. at the NAIA terminal 3 on a flight from Dubai, had just claimed their baggage from the carousel when they were asked over to the Customs office for inspection of their bags.

Upon inspection, Macabeo said, the Russian’s bagage yielded 9.9 kilograms of suspected cocaine in powder and liquid form, and the Hong Kong nationals had 9 kilos of cocaine each in their baggage.

PDEA operatives are conducting tests on the confiscated items and have taken custody of the three foreigners.  SFM