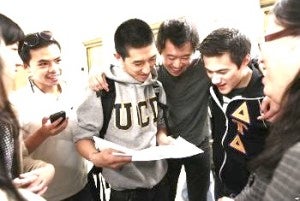 Asian Americans are the fastest-growing minority group in the U.S. and will command buying power in excess of $1 trillion by 2018. Yet, drive organizers say, half of all Asian Americans do not vote, including just 37 percent of Asian Americans aged 18 to 34, representing one of the lowest voter participation rates of any racial or ethnic demographic.

To help close this gap in a critical election year, #IAmAsianAmerican (www.iamasianamerican.com) — a new organization formed in conjunction with APIAVote (www.apiavote.org), Kollaboration (www.kollaboration.org) and 18 Million Rising (18MR.org) — is launching a national campaign to engage Asian American millennials to become active participants in the electoral process.

The free events will combine food, live music and speakers and on-the-ground engagement in each city — including a flagship red-carpet celebrity event at Los Angeles’s historic Wiltern Theater, expected to draw 2,000 attendees, which will also be live-streamed to the three other participating cities and locations across the country.

The Los Angeles event will be emceed by comedians Jenny Yang (Comedy Comedy Festival; Buzzfeed Video) and Parvesh Cheena (Crazy Ex-Girlfriend), and will feature as headliners a cappella sensations The Filharmonic (Pitch Perfect 2) and America’s Best Dance Crew champions Poreotics, as well as a selection of artists from 18 Million Rising’s just-released album Voices of Our Vote, YouTube superstar AJ Rafael and K-pop wunderkind / star of Nickelodeon’s Make It Pop! Megan Lee — as well as many other celebrity performers, speakers and presenters, to be announced.

“IAAA is about proudly owning our cross-cultural identities,” says executive director Uyen Tieu. “By celebrating Asian American civic engagement and pop culture, we want to put a spotlight on the power of our community — and get everyone to the polls this November.”

All events will be FREE to the public; advance registration is encouraged and VIP tickets with special privileges are available for purchase for the flagship Los Angeles event.

For further information, to obtain press passes or to arrange interviews with organizers or performers, contact Tanzila Ahmed at [email protected], #IAmAsianAmerican is a nonpartisan 501(c)-3 eligible project fiscally sponsored by APIAVote.