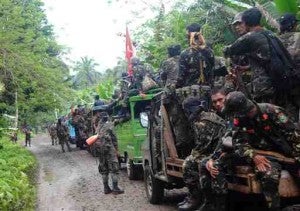 Freed were Ferry Arifin, Dan Edi Suryono and Mohammad Mahbrur, all tugboat crew who were kidnapped on Simisa Island in Sulu on June 22.

The victims were brought to Camp Teodulfo Bautista Station Hospital for medical examination and debriefing before being turned over to proper authorities.

The military said the release of the victims was an offshoot of the ongoing military operations against the ASG, and with the assistance of the MNLF.  SFM