Banff services studying ‘shabu’ use by some Filipino immigrants 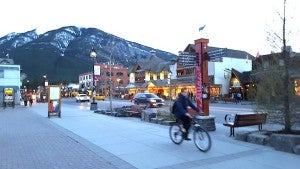 The Town of Banff, Alberta, Canada, a busy tourist area, has many Filipinos working in its hospitality industry. JHONG DE LA CRUZ

RED DEER, Alberta – Various communities here and their stakeholders are trying to understand the use of crystal meth by some newcomers to Canada, particularly Filipinos.

A possible link between work-related stress and the use of crystal meth, more commonly known by Filipinos as “shabu,” is being examined in a series of community discussions that began in summer in the tourist town of Banff, Alberta.

A scathing news by CBC.ca this month reported that some members of the Filipino community in Banff are using crystal meth. Their usage was identified as a coping strategy to handle work-related stress.

But the work-stress link appears to be part of a bigger picture, said Meagan Stewart, coordinator for Bow Valley Immigration Partnership (BVIP). “The idea that shabu might be used in the Bow Valley to cope with multiple jobs is speculation. At this time, we are seeking to learn more about how and why it might be used,” she said.

BVIP, a community partnership of stakeholders from the communities of Banff, Canmore, Lake Louise, Kananaskis and Western M.D. of Bighorn, assist with immigrant settlement and integration in the Bow Valley region.

A few members of the Filipino community had reported to BVIP’s partner organizations about their use of shabu, or of somebody they know who was using shabu, said Stewart.

“We also learned that very few of those affected had sought support for their addiction, despite the fact that free and confidential support for addictions, substance use and mental health is available in our community,” she explained. 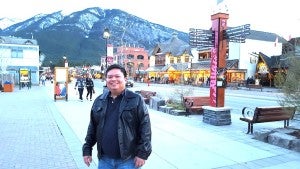 Filipino community leader Ericson Dizon, 48, who works as a housekeeper at a hotel in Banff, Alberta, says his organization is ready to help compatriots who may be addicted to crystal meth or shabu. JHONG DE LA CRUZ

“For us, this was a sign that we might need to talk to stakeholders in the community about how to ensure newcomers are accessing support services, and to make sure that we understand how crystal methamphetamine might be used differently among newcomer groups,” she said.

Stewart pointed out that the population of the Bow Valley has changed significantly over the past ten years that stakeholders have to adapt their ways to deliver prevention, support and law enforcement in the area pertaining to substance abuse.

Banff Filipino community leader Ericson Dizon, 48, believes the issue may have been blown out of proportion since it came to light.

Dizon, who was department head of a large telecommunications company in the Philippines before deciding to move to Canada three years ago, has been active in the Filipino community in this town. He works as a housekeeper at a hotel.

He has been visible in the community of Banff helping build the Filipino Canadian Association of Bow Valley Alberta Canada.

“I have not heard of any case about drug use in the Filipino community, except for the one in Canmore. I am really surprised,” he said, referring to the case of John Archie Marinas who pleaded guilty in July to stealing and using a credit card to pay his drug debt.

Marinas admitted to using shabu in order to cope with longer hours at work to support his then pregnant wife and his daughter here and family in the Philippines..

Dizon said that it is unlikely for Filipinos to resort to illegal activities after investing in their future here. “We invest our money, blood, sweat and tears in order to come here, why would we let it go to waste just like that?” he said.

Dizon estimated that Filipinos comprise a third of the population in Banff. He said that since the issue came out, many Filipinos have been affected, especially those who hold many jobs.

Filipino is the most spoken foreign tongue in Banff, according to the 2011 Statistics Canada Census. Filipinos typically belong to the guest worker sector hired in the hospitality industry here, many of whom gain permanent status.

The Filipino Canadian Association of Bow Valley, Alberta, Canada has represented Filipinos in community meetings held by stakeholders regarding the illegal drug use among immigrants.

The discussions were preventative and geared towards overcoming barriers in addressing substance use and not to single out Filipinos, said Dizon.

“We don’t have statistics on the percentage of our total population that was born in the Philippines, but Settlement Services in the Bow Valley, who provide free settlement support for permanent residents, report that over sixty percent of their clients hail from the Philippines,” BVIP’s Stewart said.

The recent reports of crystal meth use have come from the Filipino population, she said. “However, substance use affects people of all ethnic and cultural backgrounds, so shabu is just one topic in a larger discussion about how to keep our community healthy and safe,” she added. 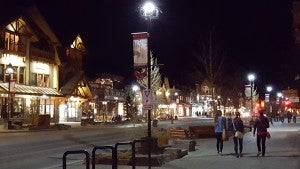 Some barriers that were identified include lack of awareness of existing services, language barriers, cultural differences and fear for negative consequences in general.

“If service providers, educators, employers and law enforcement are not aware of how drugs may affect one part of our community differently than others, or that drugs may be going by different names in different groups, it can be difficult for them to help,” she said.

For their part, Dizon said his organization would bridge help for those who seek to address their drug abuse.

“We know that the industriousness of Filipinos is because of their family and their dreams,” he added.

The Royal Canadian Mounted Police – Canmore Detachment could not be reached for comment about the issue.