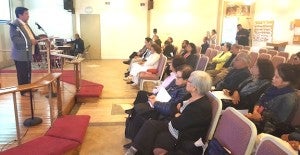 Atty. Rodel Rodis tells ecumenical service attendees that the number of victims of extrajudicial killings in the 14 years of martial law under President Marcos figures has been surpassed by the reported 3,800 deaths in the two-month-old Duterte presidency. JUN NUCUM

DALY CITY, California – Filipinos here marked 44th anniversary of the declaration of Martial Law with an ecumenical prayer service and community discussion in Daly City “to remember the victims of martial law,” which signaled the dictatorship of the late Ferdinand Marcos.

They also prayed for the current victims of human rights violations, particularly the victims of alleged extrajudicial killings (EJKs), which are on the rise in the Philippines with President Duterte’s war on drugs.

They reiterated their opposition to President Duterte’s plan for a hero’s burial to dictator Ferdinand Marcos at the Libingan ng mga Bayani.

Participants later broke into smaller groups to talk about what they could do “as Filipinos residing in the U.S., to respond to the EJKs, and to the current threats to civil liberties and democracy in the Philippines due to the seduction of strong-man, dictatorial rule.” 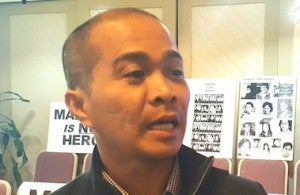 While the organizers of the event in a statement welcomed President Duterte’s invitation to the UN Special Rapporteur, the European Union and the United States to probe allegations of extrajudicial killings in the Philippines, they also “called on President Duterte to take all steps to ensure the safety of investigators and to give them access to all needed information to conduct a fully informed and fair investigation.”

“The safety of interviewees and witnesses in the Philippines was also raised as a concern,” the statement continued. The event organizers also called on the President “to respect the findings of the third parties and to adjust his policies to adhere to internationally accepted human rights conventions if the third parties so recommend, including holding accountable any officers of the law found to have violated due process.” 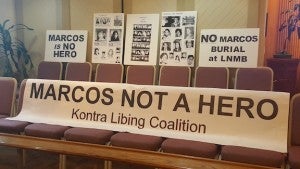 Banners adorned the site of the commemoration of the 44th anniversary of the declaration of martial law. JUN NUCUM

The Ecumenical Prayer Service was led by Fr. Abraham Alonzo and Pastor Benoni Silva-Netto, who both urged the gathering to continue to speak out against the extrajudicial killings.

Anti-martial law statement from the National Alliance for Filipino Concerns (NAFCON), a national alliance of thirty organizations in more than 20 U.S. cities,   said it wants ensure that “an undemocratic dictatorship never emerges again and we make the changes we need to create a Philippines for Filipinos who live with dignity and justice in our homeland and wherever we choose to go.”

In an interview before the services, martial law survivor Gerry Socco, who was picked up with several Kabataang Makabayan activists in a safe house while in hiding, illegally detained for seven months without charges and physically tortured repeatedly, admitted that he could not “move on” 44 years after martial law because up to now there is no apology from the Marcoses and that “they have not returned the enormous wealth” that they allegedly stole.

“Although Governor Imee Marcos asks for forgiveness on behalf of her father, I cannot see the sincerity in her words. The only way they can do it is to come up with a family apology especially if it is going to come from Imelda and Bongbong who is supposed to be the administrator of the Marcos estate.” 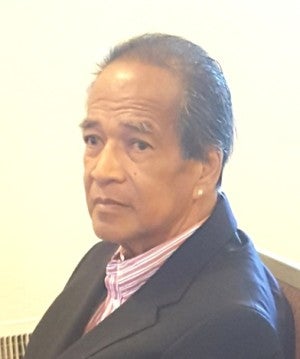 Surviving martial law era activist-victim Gerry Socco admits that he cannot move on 44 years after martial law was declared because the Marcos family has not even shown remorse for President Marcos’ crimes. JUN NUCUM

Socco claimed that he has not yet been paid the $475,000 due him in a final judgment rendered in 1992 after he filed a case against the Marcos estate.

Kontra Libing coalition member Ago Pedalizo said that the group is gathering as a community to make a clear stand that they are against Martial Law, the reincarnation of any forms of dictatorship, and extrajudicial killings.

“All the manifestations of martial law, the extrajudicial killings, are happening right now and these are reminiscent of Martial Law,” Pedalizo contended.

“We abide by the universal declaration of human rights and what is happening right now is a clear-cut violation of human rights in all its indications. We are going to take action and we are going to make the Philippine government accountable for what it is doing right now. We want to make it clear — end the extrajudicial killings, stop any indication of Martial Law, and never again to any forms of dictatorship – are what we are after.”

For his part, coalition spokesperson Rodel Rodis said that National Defense Secretary Delfin Lorenzana wrote referred to a 2010 Guardian article by Stephen Kinzer about “Human Rights Imperialism” that supposedly pointed out, among others, that that “western” pre-occupation with human rights violations in Third World countries can do more harm than good. 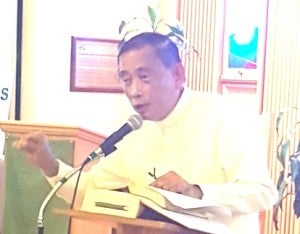 Fr. Abraham Alonzo, in his homily, stated that injustice and violence continue to happen because ”we allow them to happen, either directly or indirectly.” JUN NUCUM

“I guess the point you are making is that those of us who protest extrajudicial killings in the Philippines under Pres. Duterte are engaging in ‘human rights imperialism’ and that we should simply allow Pres. Duterte to continue with his policies without criticism from us. We do recall Pres. Duterte’s campaign pledge to kill 100,000 criminals in his first six months in office and he seems to be well on his way to reaching that milestone,” Rodis responded to Lorenzana.

“This is now a challenge to us greater than the issue of the Marcos burial. During the martial law regime there were 2,400-3,200 people killed in 14 years according to Amnesty International. That number has already been met by Duterte in only two months. Can you imagine at this rate what the problems would be? We have to continue the fight we started forty-four years ago,” Rodis observed.

Fr. Alonzo in his homily asserted that an injustice or violence continues to happen because ”we allow it to happen, either directly or indirectly.”

“Be careful of your thoughts for it may come out of your words. Be careful of your words it may come out of your actions. Be careful of your actions it may become your habit because it translated into your destiny. And that is a scary moment. They say that 91 percent of Filipinos are supporting this. And I should tell you that we should learn to condemn it because it is one of the worst evils in the world. Fifth commandment ‘Thou shalt not murder’ forbids direct or intentional killing for it is gravely sinful. The murderer and those who cooperate voluntarily in murder commit sin that cries out in heaven for vengeance. Murder of any kind especially of innocents cannot be justified even if it is commanded by public authorities,” Fr. Alonzo advised the crowd.