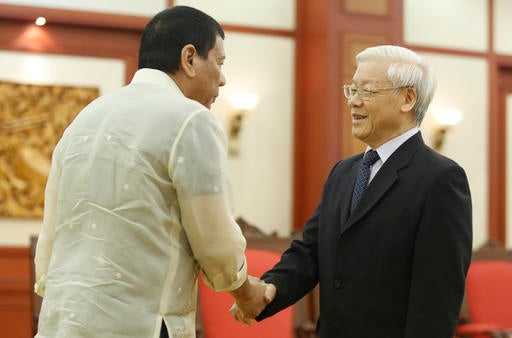 HANOI, Vietnam – You can criticize him for his rough, profanity-laced manner of speaking, but the President is a “one-on-one diplomat.”

This was how Sen. Alan Peter Cayetano described President Duterte during his two-day official visit to Vietnam, which was aimed at bolstering bilateral relations between the two countries.

In a press briefing on Thursday, Cayetano described his running mate in the May 2016 national elections as a “natural-born, one-on-one diplomat.”

“The individual leaders that he has one-on-one meetings with continuously praise him for his candidness, truthfulness, openness,” he said.

This was despite Duterte’s rough-mannered speeches and statements which Cayetano admitted has rattled some diplomatic relations.

Cayetano, who chairs the Senate committees on foreign relations and agrarian reform, is a staunch ally of the President. He was Duterte’s running mate but lost in the vice presidential race.

The senator was part of Duterte’s official delegation to Vietnam, which included top Cabinet officials.

Cayetano did not go into the details of the bilateral and confidential meetings in describing how diplomatic the President was.

He did note, however, that the tete-a-tete that Duterte had with his counterparts during his visits to other countries usually end up longer than the actual bilateral talks involving his official delegation.

“The one-on-one ends up longer because of the very good rapport between Duterte and his counterpart… So when it comes to us, it’s much shorter. In much less time, much more are being done,” he said.

Cayetano said this was “a giant step forward,” especially as Duterte continues to consolidate the Philippines’ southeast Asian neighbors.

He said Duterte expressed the need for solidarity in the region by solving problems among themselves.

During the talks between Duterte and Vietnam state president Tran Dai Quan, Tran expressed his support for the Philippines in hosting the Association of Southeast Asian Nations’ summit next year.

Likewise, Duterte affirmed his support for Vietnam, which will be also hosting the Asia Pacific Economic Cooperation summit this year.

“Vietnam said, we should do this through the principles of ASEAN and we should have the multilaterals and bilateral talks through the ASEAN,” Cayetano added.