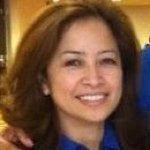 Mae Cendaña Torlakson is running for a seat in the California State Assembly.

LOS ANGELES — Even with 1.5 million Filipinos — considered the largest Asian population — in California, the group’s representation in the state Legislature has been disproportionate.

Rob Bonta made history as the first Filipino American elected to the Legislature when he won the 18th Assembly District seat (covering Oakland, Alameda and San Leandro) in 2012.

However, this November, another Fil-Am is eyeing a seat in the Assembly, with hopes to become the first Fil-Am woman to serve the state in that capacity.

Mae Cendaña Torlakson announced her bid for the 14th district seat in July 2015, and came out on top in the four-candidate race during the June primary, despite the millions of dollars raised to discredit her.

Though Torlakson fell into politics by chance years ago, the motivation to run for a higher office stemmed from her passions for helping people and representing the Fil-Am community.

“Did you know we are the largest-growing population and there’s only one Filipino assemblymember in the Legislature out of 80?” she said during a recent interview with the Asian Journal. “Actually 120 if you include the [state] senators. Rob said we should at the very least have six.”

The 14th District seat, which will be vacated by Assemblywoman Susan Bonilla, covers parts of Contra Costa and Solano counties, includes areas with large Fil-Am populations, such as Concord and Vallejo. (According to the 2010 U.S. Census, Solano County had 52,641 Filipinos reported and 61,161 in Contra Costa County.)

Before immigrating to the United States, Torlakson — who holds a tourism degree from University of the Philippines, Diliman — owned a fashion boutique and traveled around the world as a singer. For those who remember, her most famous rock hit was “Hoy Lalake.”

When her visa for the U.S. arrived, she joined her family in South San Francisco and continued doing performances throughout California.

However, a point came when she needed a stable job to support her son and daughter, Yves and Tallulah.

“I realized I needed to get a real job because singing would not do it,” she said. “I needed health care for my kids.”

A brother-in-law referred her to an opening at the Duty Free inside San Francisco International Airport. She was hired immediately as a sales supervisor.

“Two weeks before my first job, I was singing and everyone was there having fun and I was the star,” she shared. “Two weeks after, I was putting sourdough bread in a bread rack at the airport…I was putting newspapers up and doing the cashiering. It was very humbling, but I started from the ground up.”

Working her way up

From there, Torlakson applied for a “typist” position at a retirement planning company in San Mateo. She stayed at the company for five years, working her way up as the assistant to the controller.

When she received her citizenship, she moved back to the Philippines to get her children. They all settled in California in 2000.

For the past 16 years, Torlakson has worked for the University of California, beginning with the alumni office — a position she said she got because of her work with the alumni association of St. Paul Manila, where she went to high school — and then the student affairs office.

She is now a manager for the UC’s Math, Engineering, Science Achievement (MESA) program, which connects educationally disadvantaged students from middle school to university level with resources needed to get into a related industry.

The program reaches 25,000 students, including a large number of Filipinos, across the state. Many of the students are the first in their families to attend college or already have families of their own.

One of Torlakson’s efforts in the role was forging a partnership with Cisco three years ago, wherein an employee of the technology company would agree to meet with a college-level MESA student for an hour once a month.

“The [employees] were impressed so they…talked to the leaders [and] put together a recruiting day. It became a win-win because Cisco found out they could actually home grow their talent, that they don’t have to go outside their area to find the talent,” she said, adding that several students have been hired by the company.

The program has been so positively received that other major tech companies have approached Torlakson about partnerships.

“When you get people right when they graduate from college, they stay and that’s the problem with a lot of the tech jobs now — it’s like a revolving door — and those are the people they want to keep,” she said. “[Companies] are always complaining that they don’t have the diverse workforce. But that’s because they’re not going out there…Now they’re realizing that there’s talent out there.”

“My son suggested Bay Point, where I could still afford a house. I see there’s water and I thought there would be a trail by the water. I go and there’s no trail, no park. There was a piece of land that said ‘park’ but a sign that said ‘no trespassing’…Someone said, ‘Why don’t you go to the park district board meeting and ask what’s going on?’ So I did,” she recounted.

She was eventually encouraged to interview for an open seat on the Ambrose Recreation and Park District’s board, which oversees recreation services for 26,000 residents of the Bay Point and Oak Hills community of Pittsburg.

Though she was appointed to the position in early 2005, she was told that she would have to run for it come November of that year.

“Luckily, I had a good campaign manager. [My husband] Tom’s chief of staff, Gloria Omania — a Filipina who has been with Tom for 32 years — adopted me and she was my campaign manager. She was relentless,” Torlakson said. “She ran three of my campaigns and I was top vote-getter. I was the newbie and everybody said, ‘She’s new, she doesn’t know anything.’ But I still made No. 1 because I had a really good campaign.”

Currently, she is in her third term on the board and boasts some of her accomplishments, including being the first Filipina elected to office in Contra Costa County and garnering $4.5 million for the Great California Delta Trail, a plan to connect all five Delta counties.

“I found out that by being an elected official, I can do things. Remember that park I asked about? I got that to open two years before it was supposed to,” she shared.

When the District 14 seat opened up, Torlakson saw it as an opportunity to make an impact outside of Pittsburg, where she and her husband live.

“It’s just to help more people. That’s the short answer to that. I’ve helped 25,000 students in MESA. I helped about 26,000 constituents in Ambrose and I just want to spread out,” she said of why she’s running.

“I have a passion for education and I have ideas that I can share with people, be a team player with people in the Assembly and promote economic opportunities for people like what I’m doing with MESA, making sure that people invest in the people in their area. Protecting the environment is also important to me,” she said.

She went on to expound on revitalizing the plan to transform portions of the Concord Naval Weapons Station into a state university.

“My goal is to put that back on the table. Universities are business magnets. Silicon Valley was born because there was Stanford, San Jose State and Santa Clara,” she said. “We have the potential to have a Silicon Bay Delta there. Why? Because we have Highway 4, the BART system and the Delta…We have one of the best community college systems in our area. Most of our students go to UC Berkeley or UC Davis. But they have to go away. If we had a four-year comprehensive university, a UC or CSU, then they could stay there. We wouldn’t have to spend for transportation and housing. When students leave, they stay where they go and don’t come back.”

The main strategy of Torlakson’s campaign has been utilizing “people power” by knocking on doors and talking to voters around the community.

“A lot of money was thrown at my opponent but I still came in at No. 1. My opponent (Concord Mayor Tim Grayson) got $3.4 million from SuperPACs and $500,000 of that, he used on radio ads against me, telling lies about me,” she said.

During the June primary, Torlakson placed first with 32.5 percent of the vote, while Grayson narrowly trailed behind with 32.1 percent.

Heading into the November election

Her husband Tom Torklason — the current state superintendent of public instruction — said his experiences serving three terms in the Assembly and two terms in the state Senate have in part helped shape her campaign.

In an email to the Asian Journal, Bonta praised Torlakson as the “best candidate” because of her work in providing educational opportunities for disadvantaged Californians.

“Mae is a tireless advocate for increasing access to STEM education and creating good jobs for the next generation, and if elected she will fight for a CSU in Contra Costa county,” Bonta wrote. “I have long pledged that I am the first Filipino-American California state legislator, but I won’t be the last. We need Mae in the Assembly as an inspiration for our daughters and the next generation of Filipino-American leaders.”

Though the primary results in June were a slight triumph for the campaign, Torlakson acknowledged that the work isn’t over given that there are less than 50 days until the election.

“Even for this November, it’ll be even harder because the people who put money into [my opponent’s] campaign…will come back with a vengeance since they weren’t able to put me down,” she said.

She added that doing events and meeting with community leaders has helped her gain recognition among Fil-Ams — but actually getting them to vote in November will be the challenge.

“Some Filipino Republicans say, ‘Even though you are a Democrat, I’m going to vote for you.’ It’s Filipino first, before party. I appreciate that. A lot of Filipinos may be registered but they don’t vote either, so we need to continue doing outreach,” she said.

She called on Fil-Ams to support her even if they don’t live in her district, because as a legislator, her actions will have a broader impact on the state.

“The policies I say yes or no to will affect the entire state,” she said. “Having the voice is very important and I could be that voice for the Fil-Am community.