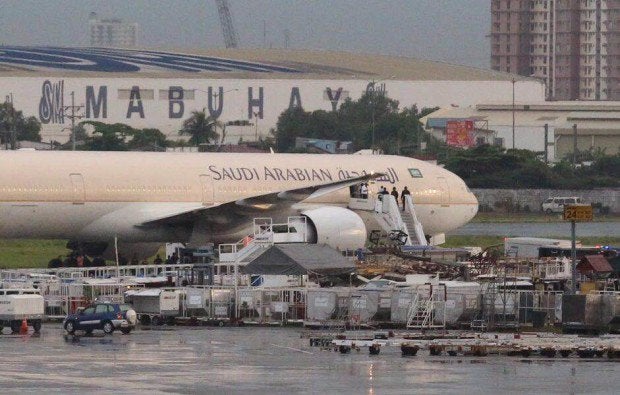 Two pilots of Saudi Airlines on a Boeing 777 flight from Mecca were involved in sending a distress signal that triggered a hijacking scare at Ninoy Aquino International Airport (Naia) on Tuesday afternoon.

In a report, Avsegroup said the pilots intended to send a distress signal for “no communication,” squawking 7600, when they received no word from the Manila control tower for 18 minutes to their radio call on their approach to the Philippine air space.

The Avsegroup director, Chief Supt. Mao Aplasca, told the Inquirer that the distress signal was the result of a consensus between the two Saudia pilots.

“They were really intending to send the distress signal for no communication but made the mistake of sending the code for a hijacking in progress instead,” Aplasca said, citing the pilots’ explanation.

“They did not realize their mistake until they were informed by the Saudia office and until they saw the emergency security setup when they landed at Naia,” he said.

One of the pilots found out that he had sounded the security alarm only when he saw the blinkers of police cars, ambulances and fire trucks positioned near the runway, a Naia source said.

The source, who requested anonymity for lack of authority to speak on the matter, told the Inquirer that the embarrassed Saudia pilot had said that he accidentally triggered the distress signal for a hijacking in progress.

“He (the pilot) had turned a knob that he should not have. When he finally realized he had sent out the distress code, he tried to tweak the knob again to try to call it off,” the source said, pointing out that it could be the reason it appeared the “hijacking” code was sent out twice.

The pilot also claimed to have tried to communicate with the Manila control tower “17 times” to take back the distress call, saying the air traffic controller could not be reached, an allegation the source found dubious.

“Another airplane within range around the same time was able to communicate perfectly with the Manila control tower,” he pointed out.

As soon as the aircraft touched down, given priority landing by the Manila control tower, the pilot tried to head for the parking bay insisting that it was a mistake but was instructed to park on the remote bay to be isolated as part of security protocol.

“The airport security forces really needed to confirm and be sure that the aircraft is not under any threat. The pilot could just be saying everything was OK under duress so the Avsegroup needed to be sure,” the source pointed out.

In a statement, the Civil Aviation Authority of the Philippines (Caap) said that based on its initial investigation, SV 872 from Jeddah sent out the distress code at 2:13 p.m. on Tuesday while it was over Lubang Island, 32 kilometers from Naia, prompting the Manila control tower to give the aircraft priority landing.

Hundreds of passengers remained on the plane for more than two hours. By 5 p.m., the accidental activation of the distress code was verified and the 410 passengers on board, plus four pilots and 17 crew members were allowed to deplane in batches, the airport general manager, Ed Monreal, told reporters.

Many of the passengers were returning from the annual Islamic pilgrimage in Saudi Arabia.

Aida Majud said she and the other passengers were not told why they were being kept on the plane.

“When we saw the armed men we thought, ‘What’s the problem?’ We wanted to know what was happening,” Majud told a television network.

But she said the atmosphere was calm, with some speculating that President Duterte had come to the airport to welcome back the pilgrims and that the armed men surrounding the plane were his security personnel.

Majud said passengers had to undergo body checks after getting off the plane to ensure no one was carrying weapons.

Airport officials said there were no major disruptions to aviation traffic, with planes continuing to land and take off, because the Saudia aircraft had been kept at an isolated area.

The Caap said the Avsegroup acted accordingly as the police unit exercising operational control and supervision over the country’s airports “against offensive and terroristic acts that threaten civil aviation.”

Even then, Caap said, the Avsegroup’s report on the incident as well as the report from the Manila International Airport Authority would have to be validated as part of the investigation.

“Findings and recommendations will then be forwarded to Caap’s counterpart, the General Authority of Civil Aviation of the Kingdom of Saudi Arabia for appropriate actions,” the CAAP said, particularly where liability for the incident should fall. With a report from AFP