PORTSMOUTH, New Hampshire – On September 11, 2006, a fire truck was found on top of the Massachusetts Institute of Technology’s Great Dome. It was a spectacularly odd sight, but it had a totally simple explanation: It wasn’t a real truck but scraps of various materials carefully assembled on-site to look like the real one. While quite dramatic, it was really just a typical project by the notoriously creative MIT student hackers to commemorate 9/11.

The sight of Donald Trump in the hustings as the official Republican nominee evokes the same mind-boggling how-did-that-happen puzzlement to many political observers, including virtually all talking heads who greatly exaggerated reports of Trump’s early political demise.

Why did the Republicans end up with such a bizarre and pompously vacuous far-right populist with zero political experience and a track record of business bankruptcies?

Similarly, Philippine President Rodrigo Duterte’s widely reported uncouth behavior (often mocked by late night comedians in the U.S.) and his open disdain for human rights make many people, especially those in the West, wonder how such an odd character ended up at the very top the Filipino people’s political Great Dome.

In search of an explanation

In Trump’s case, various explanations have been posited, including his wholesale appeal to what Hillary Clinton recently called a “basket of deplorables” (bigots, misogynists, xenophobes, homophobes, etc.). But surveys suggest that his support actually cuts across demographic lines, including age, gender, income, education and religiosity.

There is one group of social scientists who are suggesting that, more than the usual demographic-based explanations, support for Trump is greatly dependent on one’s psychological profile. 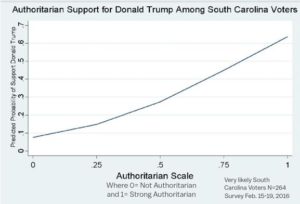 Will that same correlation hold up if we conduct a similar survey among Filipinos in relation to their support or non-support for President Duterte, whose autocratic brashness is routinely compared to Trump’s?

For his South Carolina study, McWilliams used a set of four simple questions called the Conformity Scale created by Stanley Feldman in the early ‘90s. It is widely acclaimed as a remarkably accurate survey and has been used by other leading social scientists. The questions are about parenting, which reveal how one values order, hierarchy, and conformity:

In addition to the four standard questions, we added two more to see any correlation in the Philippine setting:

On the issue of trust in the president, the survey validates two insights from the MacWilliams study: 1) those very strongly averse to authoritarianism are less likely to support President Duterte (with 58 percent not trusting his leadership), and 2) those who are temperamentally authoritarian are likely to support his strong leadership (54 and 58 percent among those who score high and very high, respectively). 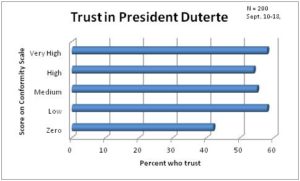 However, even among those who are medium and low on the Conformity Scale, support for the president ranges from 55 to 58 percent, results that defy the main hypothetical expectation of the survey (i.e., that those averse to authoritarianism would likely oppose Duterte’s strongman rule).

One possible explanation is that of Karen Stenner, who in her book The Authoritarian Dynamic argues that some people can have “latent authoritarianism” that can be activated in response to heightened societal threats (drug menace, crimes, hostile neighbors, etc.). Such “threats” can be real or made “real” by a leader effectively framing society’s main problem as one of peace and order. 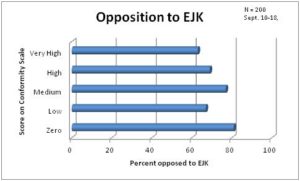 On the issue of extrajudicial killings, as hypothesized, those who score zero to medium are more likely to oppose the extreme use of extrajudicial killings in the war on drugs, with up to 81 percent opposing. However, even those who are temperamentally authoritarian are significantly opposed, with 69 percent of those who score high on the Conformity Scale and 63 percent who score very high against the fatal disregard for due process in the conduct of the drug war.

One possible explanation for that variance is the influence of the conservative Catholic Church, which has been quite vocal against the violent drug war, and/or the Filipino people, like the rest of the modern world (and contrary to accusations that they are a nation of murderous barbarians crying for blood), in fact value life as the most fundamental human right, and their natural craving for order does not necessarily change that.

This study suggests that, while President Duterte was gifted with a high 91 percent trust rating at the start of his six-year term, that significant amount of political capital can be undermined by daily reports of extrajudicial killings, both by the police and vigilante groups. A big crack in his political support it turns out is among his natural constituents: those with conformist/authoritarian tendencies.