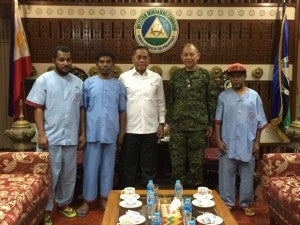 ZAMBOANGA CITY – Teo Doros Kofong, one of the three Indonesians who were freed by their Abu Sayyaf captors, urged the government to finished off the bandit group.

Kofong, in a press briefing late Sunday afternoon, said his life in captivity was “very hard.”

“That is why we request the Philippine and Indonesian to keep conducting operations and as soon as possible crush this ASG,” he said.

Kofong and his fellow fishermen, Lorence Koten and Emmanuel Arakian, were freed before midnight on Saturday.

“I feel so relieved that now we are free because I was thinking that I would be beheaded,” he said, expressing his gratitude to the Moro National Liberation Front for negotiating for their release.

“I am expressing my gratitude to the Philippine and Indonesian governments for this freedom,” he said.

The three were kidnapped last July 19 in Lahad Datu in Indonesia.  SFM