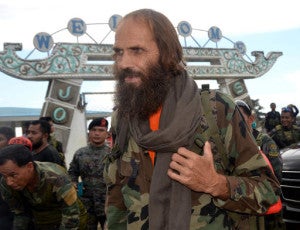 Released Norwegian hostage Kjartan Sekkingstad carries a backpack as he boards a plane to take him to Davao city for an audience with Philippine President Rodrigo Duterte Sunday, Sept. 18, 2016 on Jolo island, Sulu province in southern Philippines. (AP Photo/Nickee Butlangan)

Norwegian Ambassador to the Philippines Erik Forner  said, “The President’s personal commitment even before he took office has been crucial in solving this issue.”

“I would like to express my heartfelt thank you to the President, Secretary Dureza, (Moro National Liberation Front) chairman (Nur) Misuari and his finest men who released me yesterday afternoon, got me out of captivity,” Sekkingstad said on Sunday (Sept. 18).

“Also the Norwegian Embassy, the Norwegian team. My Filipino family and my family in Norway. Everybody who has helped make this release possible.”

“I am very happy to be alive and free. It’s a beautiful feeling.”  SFM