Pro-Clinton? Pro-Trump? Fil-Ams in NY talk about it

NEW YORK CITY – Noted Filipino Americans representing the Democratic and Republican parties shared their personal views and insights on their candidates’ advocacies and political platforms at a forum on the US presidential election.

“US Presidential Elections Forum: What’s in it for me?” was hosted by the Fil-Am Press Club New York led by Ricky Rillera co-organized in cooperation with the program informs candidates on issues affecting the Filipino community while promoting Filipino American participation in US and Philippine elections. 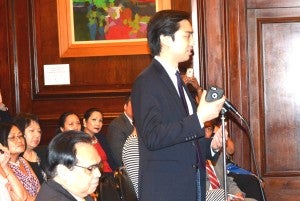 Consul General Mario De Leon remarked: “There are 5.9 million Asian Americans who are registered voters in the US. In the 2012 presidential elections, Filipino Americans emerged as the sixth largest voting population by ethnicity and in 2008 and 2012, Filipino Americans helped President Obama get elected.” 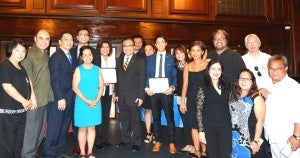 De Leon added: “Filipino Americans should be educated on the elections as an informed community is an empowered community.”

A sizeable crowd, which included Councilman Jonathan Wong of Mahwah, New Jersey, members of the Filipino American Lawyers Association of New York, community members, students and the academe from Mount Saint Vincent College, attended the event held at Kalayaan Hall in the consulate.

The speakers replied when quizzed about their candidate’s platform and qualifications. Asked about Hillary Clinton’s unauthorized use of a private email server, Tengco said that Clinton had admitted her mistake and expressed and that she would have separated her servers. Tengco stressed that the DNC considers this matter resolved, but it was unfortunate that this issue was being used to distract voters from focusing on the real issues.

When quizzed about the Donald Trump’s qualifications and what advice he would give his candidate, Rep. Coleman said he expected Americans leaders to be men and women of honesty, integrity and faith in God, which “are also Filipino values” that were taught to younger generations of Filipino Americans and used to promote positive values. Both Clinton and Trump don’t possess those values, he said. He also advised Trump to learn how to admit mistakes, humility and openness.

As to promoting diversity in judicial and other appointments, Nicolas-Lewis said that the Democrats already have a list to be recommended by Hillary for positions in the judiciary and other departments in case she is elected.

However, she opined that appointments to the judiciary were more important because of major issues pending before the bench, such as immigration, the status of campaign contributions and civil liberties. Clinton would choose liberal-minded judges who would support affirmative action and diversity in the courts, she added.