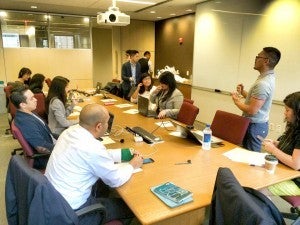 WASHINGTON, D.C. — Two engineers, two lawyers, two marketing and communications professionals, a Broadway producer, an educator, a transportation infrastructure specialist and a culinary enthusiast, form the fifth batch of young Filipino American leaders who will go on an immersion trip to the Philippines to meet with influential Filipino personalities and deepen their understanding of issues affecting their country of heritage.

The following are the 2016 FYLPRO delegates:

Minister Patrick Chuasoto, the Embassy’s chargé d’affairés ad interim and chair of the FYLPRO Selection Committee, noted the high caliber crop of applicants to the 2016 edition of FYLPRO.

“The application process has been highly competitive this year and we are proud of the ten delegates who made the final cut. They have enormous leadership potential, and all have exhibited the will to be involved not only in shaping the future of the Filipino American community but also in contributing to Philippine development,” said Chuasoto.

The 2016 FYLPRO immersion trip on November 23 to December 2 is a joint undertaking by the Philippine Foreign Service Posts in the United States, the Ayala Foundation, Inc. and the Filipino Young Leaders Program Organization.