US community groups warn of consequences of not voting 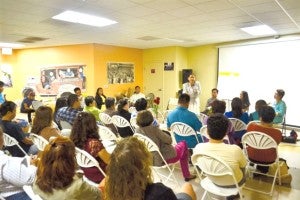 A discussion group at the Pilipino Workers Center on the importance of voting the during the coming US elelctions. AJ PRESS

LOS ANGELES — Lolit Lledo and many other activists boycotted the 1986 snap elections that led to Philippine President Ferdinand Marcos’s ouster. They refused to campaign, vote or otherwise take part in what they viewed as a rigged system.

In retrospect, she said the decision not to participate was detrimental to the Philippines in the long run. Many of the people representing interests from the past regime that she had fought against eventually re-entered positions of prominence.

“Because we did not participate we [activists] were left out when Cory was the president,” said Lledo, who now serves as the associate director for Pilipino Workers Center (PWC). “If you have a chance, you have to be a part of the political process.”

Resentment has characterized the 2016 U.S. presidential race. However, individuals–especially Filipinos, who are dissatisfied with this year’s candidates and are thinking of skipping November’s election–forget what is at stake. That’s the belief of panelists representing a spectrum of liberal views at a forum held at the PWC in Los Angeles on Saturday, Sept. 10.

Speakers challenged citizens and residents to make an impact in this year’s election cycle, and the future of American politics.

They noted that a vacant seat on the Supreme Court, vastly contrasting immigration plans proposed by this year’s major party candidates and other emerging topics place too much at risk for Filipinos and other people of color to stay silent in November.

“If someone tells you it makes no difference, they’re not living the life you’re living,” said Bill Gallegos, former executive director of the environmental group Communities for a Better Environment, during Saturday’s forum.

He added that Republican presidential candidate Donald Trump’s plans for America would mean sending out “200,000 ICE (Immigrations and Customs Enforcement) agents with guns and tanks to round people up.”

Along with other panelists, Gallegos, a critic of Trump and former Bernie Sanders supporter, warned against the consequences of enacting Trump’s plan to deport millions of undocumented immigrants living in the United States.

They also criticized the Republican candidate’s stance on foreign policy, the environment, education, minimum wage laws and other matters of great import to Filipinos and other minority communities.

PWC hosted Saturday evening’s event in order to engage more Filipino Americans in the political process during a time that may prove to be a pivotal moment in their community’s future.

Many members of the community are either unregistered or do not plan on voting, and Fil-Ams have traditionally been reluctant to take part in political action, according to PWC Executive Director Aquilina Versoza.

“The actual voting potential of our community is not being realized; we’re below average in turnout,” said Versoza. “This could be seen as negative, but on the other hand, I see a lot of potential in our community.”

She and other activists hope to awaken the political consciousness of California’s largest Asian American and Pacific Islander ethnicity. Events like Saturday’s forum serve to introduce members of the community to the national discussion and inform them of their options.

No lesser of two evils

“There is no lesser of two evils, only candidates that do or do not better represent your ideals,” said Gana on Saturday. “A vote for a third party is not a wasted vote.”

He said widespread disillusionment felt by many voters during the current election cycle is a sign that Americans are ready to substantially challenge the two-party system. Americans can combat the root cause of that resentment by considering a vote for Green Party Candidate Jill Stein, Libertarian Gary Johnson, or any of the other non-establishment party candidates.

However, Carol Ojeda-Kimbrough, an activist in attendance at the forum, suggested that third-party votes could raise the likelihood of a Republican victory in November.

As a cautionary tale, she brought up the 2000 presidential race in which Democrat Al Gore won the popular vote, but lost in the electoral college to Republican George W. Bush. Many progressive voters who supported Green Party candidate Ralph Nader that year deeply regretted her decision, especially after the initiation of the Iraq War, according to Ojeda-Kimbrough.

KMB and PWC do not support a particular party, but Gana said he could sympathize with people worried about the implications of a possible Trump presidency. However, he believes that even if the Republican nominee took office, one way or another, either Congress or the American people would not allow the billionaire’s most controversial proposals to be realized. Gana added that a Trump presidency would provide further incentive to move away from the two-party system.

Whichever side they may lean towards, panelists say it is critical for Fil-Ams to speak out more frequently to ensure that the needs of the community are not ignored. Even if they are not eligible to vote, residents can still help the community make an impact through volunteer work.

“We want everyone to get involved,” said PWC community organizer, Ian Kamus. “Even if you don’t necessarily like the candidates, there are other issues that are oftentimes bigger than the candidates that you have to look at.”