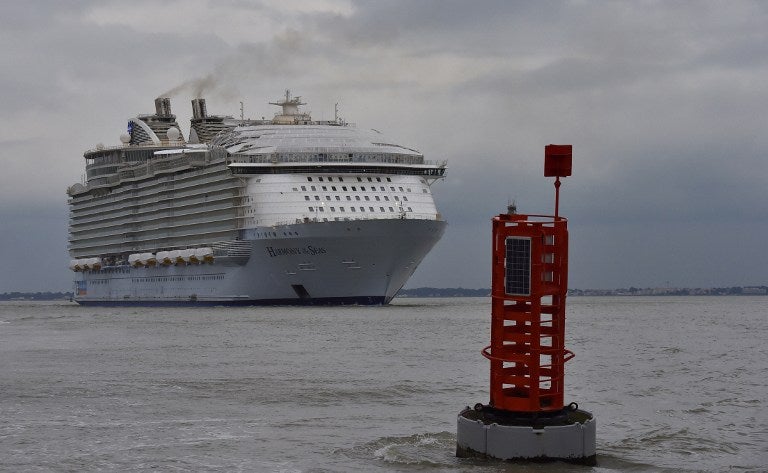 The Harmony of the Seas cruise ship leaves the STX shipyard of Saint-Nazaire, western France, for a three-day offshore test, on March 10, 2016. A Filipino crewman was killed and three others were hurt during a safety drill on board the cruise ship. With a capacity of 6.296 passengers and 2.384 crew members, the Harmony of the Seas, built by STX France for the Royal Caribbean International, is the world’s largest ship cruise. AFP

MARSEILLE, France — A Filipino crewman was killed Tuesday during a safety drill on the world’s biggest cruise liner, the Harmony of the Seas, while it was docked in Marseille, a city official said.

The 42-year-old and four other crew members were in a lifeboat that plunged 10 meters (35 feet) into the water during a safety drill in the southern French port.

Three other Filipinos and an Indian man were hurt in the incident, and two were fighting for their lives.

A fire service spokesman said: “One person is dead and four are injured, including two whose lives are in danger.”

Marseille’s deputy mayor Julien Ruas told AFP the five were the only people in the lifeboat at the time when it became detached from its fastenings and “fell 10 meters” into the harbor.

The city’s prosecutor Xavier Tarabeux said a similar drill is carried out every week on the ship.

“It involves putting a lifeboat to sea,” he said.

An investigation has been opened to find out why “the cable or the fastenings” holding the lifeboat in place gave way, the prosecutor said.

The boat “fell suddenly into the water,” he added.

Royal Caribbean said in a statement: “We are keeping our colleagues and their families in our thoughts and prayers.”

The Harmony of the Seas sailed into Marseille early Tuesday from the Spanish Mediterranean island of Majorca.

The ship had been scheduled to set sail for Italy later on Tuesday but the investigation into the lifeboat incident is expected to delay its departure until Wednesday at the earliest, the prosecutor said.

The 120,000-ton liner operated by Florida-based Royal Caribbean only entered service in May.

At 66 meters (217 feet), it is the widest cruise ship ever built, while its 362-meter length makes it 50 meters longer than the height of the Eiffel Tower.

On its maiden voyage, it sailed from Southampton on England’s south coast to Barcelona.

Built in the STX shipyard in the northwestern French port of Saint-Nazaire, the Oasis-class liner has 16 decks and can carry more than 6,000 passengers and a 2,400 crew.

Among the onboard attractions are “The Ultimate Abyss”, a 10-storey slide from the top deck to the main deck which Royal Caribbean bills as the world’s biggest ship-mounted waterslide.

Royal Caribbean has ordered a sister ship of the Harmony to join its fleet in 2018.

Harmony of the Seas by the numbers