To avoid trouble, Duterte says no to joint sea patrols 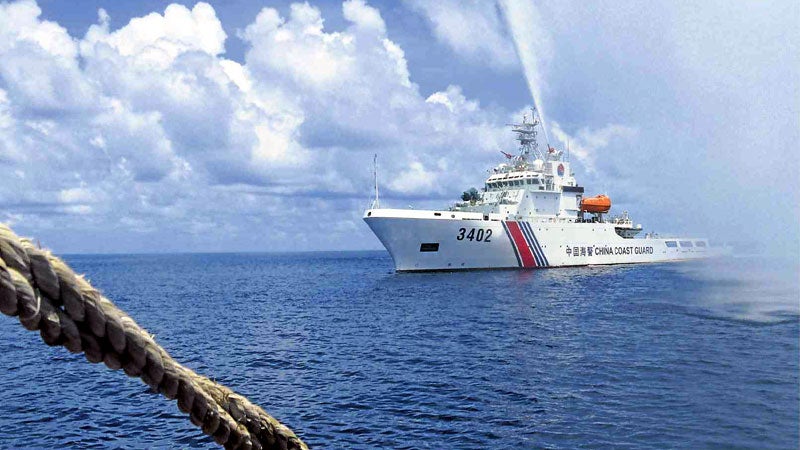 SEA DISPUTE In this photo taken on Sept. 23, 2015, a Chinese Coast Guard vessel fires its water cannon on Filipino fishermen in a confrontation off Scarborough Shoal in the West Philippine Sea. A UN court is expected to issue a ruling today on a complaint filed by the Philippines questioning China’s territorial claim over almost all of the sea, including its reefs, shoals and islets. AP

THE Philippines will no longer engage in joint patrols or expedition in the disputed waters near the South China Sea with foreign powers, President Rodrigo Duterte said on Monday.

“We will not join any expedition or patrolling the sea. I will not allow it because I do not want my country to be in involved in a hostile act,” Duterte said in a speech during the 48th anniversary of the 250th Philippine Airlift Wing at the Villamor Air Base in Pasay City.

“I just want to patrol our territorial waters. We do not go into patrol or join any [foreign] army because I do not want trouble,” he added.

The President said the Philippines would only patrol within its territorial waters.

“Territory is limited to the 12-mile limit. That is ours. Hanggang diyan lang tayo,” he said.

But the chief executive reminded Beijing of the United Nations ruling favoring the Philippines diplomatic protest against China over the disputed waters.

“So may I remind China again, beyond the territorial waters are the entitlement of the sea. Yung napanalo natin, but it is not part of our territory. It is part of our exclusive economic zone, iyong mga isda, ano ang mga nakita mo diyan, pati yung sa baba, yung oil pati gas kung meron,” he said.

Earlier this 2016, the Philippines and the United States embarked on the joint patrol in the disputed sea.