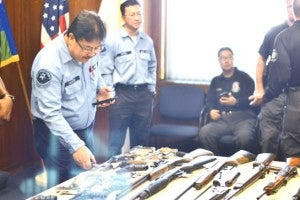 LOS ANGELES — Assault type rifles, handguns and even a submachine gun designed for concealment in a briefcase were among the weapons seized from people on probation and displayed in downtown Los Angeles on Thursday, September 8, as a result of a program inspired by the shooting death of a Filipino American mail carrier in 1999.

Officers of the Los Angeles County Probation Department laid out a wide assortment of weapons in a conference room of the Kenneth Hahn Administration building to showcase the efforts of the Developing Increased Safety Through Arms Recovery Management (DISARM) program.

The illegally owned items were found as the result of wellness and compliance checks on probationers conducted by various LA County law enforcement agencies.

“Since I initiated it in 2000, this program has removed nearly 11,000 guns from the streets,” LA County Supervisor Mike Antonovich told the Asian Journal. “This means we have saved a number of lives because the criminals don’t have the guns to commit crimes.”

The program was largely inspired by a wave of gun control advocacy in response to a shooting spree that happened at the North Valley Jewish Community Center in Granada Hills, California. There, on Tuesday, August 10, 1999, a self-described white supremacist opened fire, wounding two adults and three children.

Following the initial attack, the gunman later crossed paths with Filipino American postal worker Joseph Ileto. The letter carrier was filling in as a substitute on another person’s route when he was murdered for being a minority and a federal employee.

Since it was launched nearly 16 years ago, DISARM has contributed to the arrest of over 23,000 people in possession of a firearm while on probation, according to police statistics. In collaboration with the L.A. Interagency Metropolitan Police Apprehension Crime Task Force (IMPACT), about $730 million dollars in illegal drug money has been recovered.

Antonovich said he would like to see the program expanded on a statewide level.

“They can use Los Angeles County, for the past 16 years as the pilot program showing that it works effectively and it needs to be expanded,” he said.

Despite ongoing efforts by law enforcement, police say the confiscated weapons are likely only a fraction of the unlawfully possessed guns out on the street because firearms can be purchased on the black market or stolen. Officers say tips from the public are crucial in keeping guns out of the wrong hands.

“Our citizens are our ears, and they’re our eyes,” Lieutenant Lajuna Haselrig of the Los Angeles County Sheriff’s Department told the Asian Journal. “Private citizens see before we do.”

She hopes those who suspect a person of illegally possessing a firearm will contact either the probation department, local police or, if they wish to remain anonymous, LA crime stoppers. In addition, officers strongly encourage people who own guns to keep them locked away in a gun safe.