Asean, US to boost measures vs militarization in South China Sea 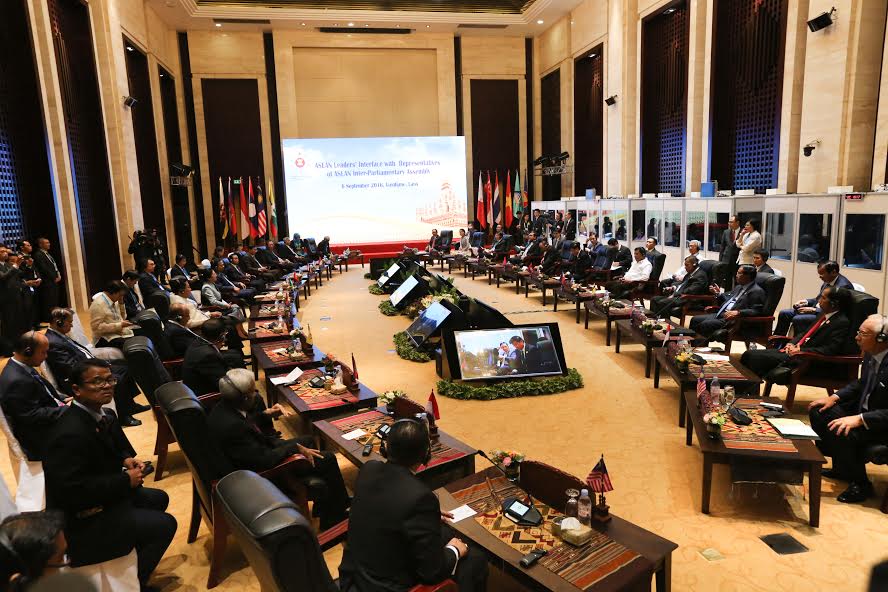 Leaders of Association of Southeast Asian Nations (Asean) and the US vowed to step up measures to stop the rising militarization of the disputed waters in the South China Sea despite a landmark arbitration court ruling that dismissed Beijing’s historical claims over 90 per cent of the territory under nine dash line.

The parties signed the Asean-US Summit statement on September 8 at the sidelines of the  Asean Leaders Summit held last week in Vientiane, Laos

The Chairman’s statement of the Asean-US Summit emphasized “the importance of maintaining peace, stability, safety, security and unimpeded lawful maritime commerce, freedom of navigation in and over-flight above the South China Sea.”

“We underscored the importance of exercising self-restraint in the conduct of the activities, and for the states concerned to resolve disputes through peaceful means in accordance with international law, including the 1982 United Nations Convention on the Law of the Sea (UNCLOS),” said the 4th Asean-US Leaders Statement.

“We also emphasized the importance of non-militarization,” the Asean-US leaders added.

Last week, US President Obama called on China to abide by the arbitral tribunal’s ruling that seeks to stop its increasing military activities in the disputed waters in the South China Sea.

The Department of Foreign Affairs (DFA) last week sent a note verbale to Chinese ambassador to the Philippines Zhao Jianhua to explain the presence of five Chinese vessels near the disputed Scarborough Shoal, off the coasts of Zambales province that were spotted by the Department of National Defense.

The Chinese embassy in Manila explained the Chinese vessels were in the area for patrol mission and did not carry out irregular activities.

The Permanent Court of Arbitration (PCA) in The Hague ruled on July 12 that there was no legal basis for China’s historical claims under the nine-dash-line that it has used to occupy islands and create artificial islands in the waters of the South China Sea.

Asean, with four members as claimants – Philippines, Vietnam, Brunei and Malaysia  — agreed to work on an early conclusion of the legally binding Code of Conduct (COC) in the South China Sea to be signed by Asean and China that seeks to end China’s increasing military incursions into the disputed waters.

Exercising self-restraint is indicated in the Asean-China 2002 Declaration of Conduct (DOC) in the South China Sea that prevents parties from engaging in aggression and military activities in the disputed waters.

Senior diplomats, however, describe the COC as a political agreement and does not contain sanctions; thus, the need to sign a legally binding Code to stop China’s military activities and presence in South China Sea.

At the same time, leaders of Asean-US raised concern on the continuing nuclear tests by North Korea that violates the United Nations Security Council (UNSC) resolutions

“We shared serious concerns over the recent developments on the Korean peninsula, including the nuclear test on 6 January 2016 and subsequent launches using ballistic missile technology, including submarine-launch ballistic missile on 23 August 2016 by the Democratic People’s Republic of Korea (DPRK), which are in violation of the relevant United Nations Security Council (UNSC) resolutions,” said the leaders of Asean-US.

The leaders also called for the resumption of the Six-Party Talks to make further progress in denuclearization of the Korean Peninsula in a peaceful manner.

“We urged the DPRK to comply with all relevant UNSC resolutions, including the UNSC Resolution 2270 and called on all parties to exert common efforts to maintain peace and security in the said region,” said the Chairman’s statement of Asean-US Leaders Summit.

The leaders also agreed to strengthen continuing dialogue on security and political issues in the run up of the 5th Asean-US Summit to be held in the Philippines in 2017.