Obama to Duterte: Do it the right way | Global News
Close
menu
search

Obama to Duterte: Do it the right way

VIENTIANE—US President Barack Obama urged President  Duterte on Thursday to conduct his war on drugs “the right way,” after 3,000 people were killed in the crackdown in just over two months.

“As despicable as these (crime) networks may be and as much damage as they do, it is important from our perspective to make sure that we do it the right way,” Obama told reporters when asked about his conversation with Mr. Duterte on the sidelines of the Association of Southeast Nations (Asean) summit in Laos.

“Because the consequences of when you do it the wrong way are innocent people get hurt and you have a bunch of unintended consequences that don’t solve the problem,” Obama said he told Mr. Duterte.

Relations between the United States and the Philippines, longtime allies, saw a spectacular setback this week after the foul-mouthed Mr. Duterte branded Obama a “son of a bitch” and warned that he would not be lectured by the US leader on human rights.

Mr. Duterte’s outburst on Monday was in response to being told Obama planned to raise concerns about his war on drugs.

“I do not have any master except the Filipino people, nobody but nobody. You must be respectful. Do not just throw away questions and statements. Putang ina, I will curse you in that forum,” Mr. Duterte told reporters, using the Filipino phrase for “son of a bitch,” shortly before flying to Laos.

“We will be wallowing in the mud like pigs if you do that to me,” he added.

Obama initially responded by calling Mr. Duterte a “colorful guy,” but then called off the meeting after the international media reported heavily on the issue.

At the press conference marking the end of his trip to Laos Obama said he was unfazed by Mr. Duterte’s jibe.

“I don’t take these comments personally because it seems as if this is a phrase he’s used repeatedly, including directed at the Pope and others,” adding that such choice words were “a habit, a way of speaking for him.”

Mr. Duterte has branded Pope Francis, the US ambassador to Manila and the United Nations as “sons of bitches.”

Obama and Mr. Duterte met briefly and shook hands on Wednesday night before an Asean leaders’ gala dinner, but they only exchanged “pleasantries,” according to the White House.

The brief meeting took a little sting out of the soured relationship caused by Mr. Duterte’s intemperate language, and Philippine Foreign Secretary Perfecto Yasay said he was happy the two leaders had met.

“They met at a holding room and they were the last persons to leave the holding room. I can’t say how long they met. It all springs from the fact the relationship between the Philippines and the United States is firm, very strong. The basis for this relationship is historical and both leaders realize this. And I’m very happy that it happened,” Yasay said.

Story of the evening

For reporters covering the dinner, the prospect of a meeting or handshake between Obama and Mr. Duterte was the story of the evening.

Malacañang earlier Wednesday released a statement saying Mr. Duterte would sit next to Obama at the gala dinner.

“The media from all over the world, including from the Philippines, are up in excitement as each await the event where the two leaders will possibly say something positive,” the statement said.

But the story fizzled: At a photo session with the leaders, Obama stood several spots to the left of Mr. Duterte.

At dinner, they were seated far enough from each other to make a chance encounter unlikely.

Mr. Duterte chatted with Prime Minister Dmitry A. Medvedev of Russia during the photo session and later over dinner, where he lifted his wineglass to toast Medvedev.

Obama appeared to be having a sober exchange with Sultan Hassanal Bolkiah of Brunei. 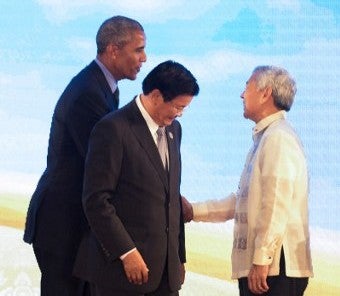 MEETING OBAMA US President Barack Obama greets Foreign Secretary Perfecto Yasay while Laos Prime Minister Thongloun Sisoulith looks on, during the Asean-US summit in Vientiane, Laos, on Thursday. Yasay represented President Duterte at the Asean meetings with the leaders of the United States and India on the last day of the summit. AFP

‘More will be killed’

Mr. Duterte was elected to office in a landslide this year after pledging to kill 100,000 people in an unprecedented war on illegal drugs.

He vowed in the campaign that so many bodies would be dumped in Manila Bay that the fish there would grow fat from feeding on them.

Mr. Duterte has also repeatedly promised to protect policemen from prosecution if they are charged over the deaths and insisted human rights cannot get in the way of his war on drugs.

He has said the Philippines is in danger of becoming a “narcostate,” and eliminating drugs in society is the top priority of his administration.

On the day he was sworn into office, June 30, Mr. Duterte urged people living in a Manila slum to kill drug addicts in their community.

The United Nations special rapporteur on summary executions, Agnes Callamard, has warned incitement to kill is a crime under international law.

Despite growing condemnation of the comments and what rights groups say are rampant extrajudicial killings, Mr. Duterte has vowed to continue.

“More people will be killed, plenty will be killed until the last pusher is out of the streets,” Mr. Duterte said on Monday. Reports from AFP, AP and New York Times News Service/TVJ

Obama shrugs off Duterte’s tirades against him