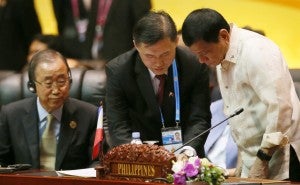 MANILA — United Nations Secretary General Ban Ki-moon urged Asean countries, including the Philippines, on Thursday, to ratify the Paris Agreement on Climate Change within the year to help bring it closer to coming into force.

Ban was speaking at the UN-Asean Summit held in Vientiane, Laos, where Foreign Affairs Secretary Perfecto Yasay Jr. represented the Philippines instead of President Duterte.

The UN chief said that among the 10 members of the Association of Southeast Asian Nations, only Laos has so far ratified the Paris Agreement, which contained mainly commitments or efforts to reduce greenhouse gas (GHG) emissions.

Aside from Laos and the Philippines, other Asean members include Indonesia, Thailand, Malaysia, Singapore, Brunei, Cambodia, Myanmar (Burma) and Vietnam.

So far,  27 countries — representing about 39 percent of global GHG emissions — have ratified the Paris Agreement.

“We need 28 more countries to ratify, accounting for a further 16 percent of greenhouse gas emissions, to bring this agreement into force,” Ban said in his opening remarks.

“If nine more Asean countries ratify, we will have just 19 more countries to go, I am counting on your leadership,” he told the attending heads of state and government.

Ban said he was convening a special summit meeting on Sept. 21 at the UN headquarters in New York to accelerate the ratification process.

The UN said in a statement Ban emphasized that the Paris Agreement was founded on respect for human rights and democracy.

“We must now explore ways to mainstream human rights across all areas of the Asean-UN partnership,” he said.

The Philippines signed the Paris Agreement during the previous administration, but Mr. Duterte last July 18 said his administration would not honor it.

The President described the agreement as “stupid,” considering that it would stymie the Philippines’ growth toward industrialization.

Also in Vientiane, Ban visited a community-based drug treatment centre in the capital, supported by the UN Office on Drugs and Crime (UNODC).

Ban said efforts should be intensified quickly in the region to help develop drug use prevention, care and treatment programs within communities and have family support, with a focus on vulnerable young people.

In August, Duterte criticized the United Nations for condemning the spate of killings of suspected drug criminals in the Philippines, with the number of dead now exceeding 2,000 already, while failing to stop the massacre of Syrians in their prolonged civil war.  Duterte also questioned the UN chief for immediately condemning the Philippine government even before the UN could launch an inquiry into what has been happening in the Philippines in accordance with protocol.

But the UN insists the government is duty bound to uphold the rule of law in fighting the drug menace.  “Claims to fight illicit drug trade do not absolve the government from its international legal obligations and do not shield state actors or others from responsibility for illegal killings,” Agnes Callamard, the new UN Special Rapporteur on summary executions, said in a statement on Aug. 18.  SFM