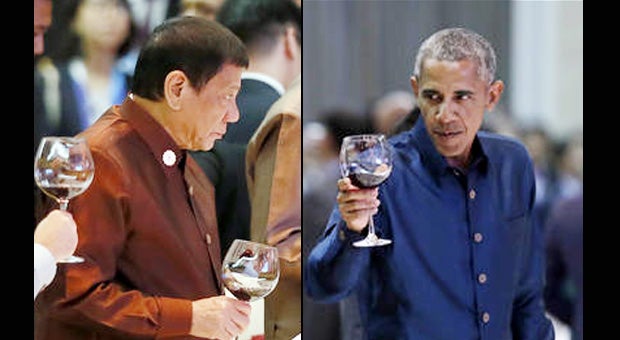 Philippine President Rodrigo Duterte and US President Barack Obama, right, during the gala dinner of ASEAN leaders and its Dialogue Partners in the ongoing 28th and 29th ASEAN Summits and other related summits at the National Convention Center Wednesday, Sept. 7, 2016 in Vientiane, Laos. AP

The brief meeting took a little sting out of the soured relations caused by Duterte’s intemperate language in referring to Obama earlier this week. That had caused Obama to cancel a formal meeting scheduled for Tuesday.

“They met at the holding room and they were the last persons to leave the holding room. I can’t say how long they met. It all springs from the fact the relationship between the Philippines and the United States is firm, very strong. The basis for this relationship is historical and both leaders realize this. And I’m very happy that it happened.”

Obama and Duterte are in the Laotian capital along with other regional leaders for the summit. All of them made their way through the holding room before heading to the banquet hall.

According to a White House official who would not be named discussing the private meeting: Obama had a brief discussion with Duterte before the ASEAN Gala Dinner in the leaders’ holding space. The exchange consisted of pleasantries between the two.

On Monday, hours before arriving in Laos, Duterte told Philippine reporters he wouldn’t accept questions from Obama about extrajudicial killings that have occurred during his crackdown on suspected drug dealers and users. More than 2,000 people have been killed in the crackdown since he took office on June 30.

“I do not have any master except the Filipino people, nobody but nobody. You must be respectful. Do not just throw questions. P***** i**, I will swear at you in that forum,” Duterte said, using the Tagalog phrase for “son of a bitch.”

On Tuesday, Duterte expressed regret over the remarks, but the damage was done.

A Philippine Department of Foreign Affairs spokesman, Charles Joe, also said Obama and Duterte met in the holding room. He said it was a mutually agreed meeting, but that he had no details of what was discussed.

Obama and Duterte entered the dinner venue separately, and were seated far apart and did not interact with each other during the dinner that lasted an hour and 20 minutes.