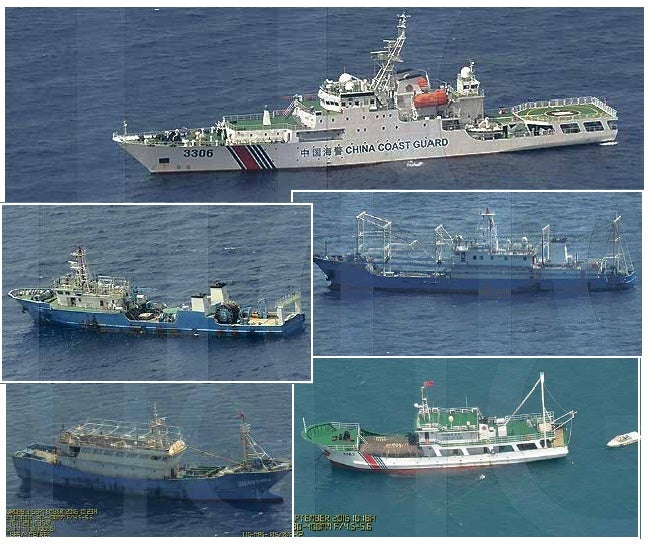 An artificial island at Scarborough Shoal, known in the Philippines as Panatag Shoal, could be a game changer in China’s quest to control the South China Sea and raises the risk of armed confrontation with the United States, according to security analysts.

Beijing this week insisted it had not started building at the shoal—a move that could lead to a military outpost just 230 kilometers from the main Philippine island, Luzon, where US forces are stationed.

But the Philippines on Wednesday released images it said showed Chinese ships in the area that were capable of dredging sand and other activities required to build an artificial island.

“We have reason to believe that their presence is a precursor to building activities on the shoal,” Arsenio Andolong, spokesperson for the Philippines’ Department of National Defense, told Agence France-Presse (AFP).

“We are continuing our surveillance and monitoring of their presence and activities, which are disturbing,” Andolong said.

There was no explanation for the timing of the release of the photos, but it came two days after Manila expressed “grave concern” about the increasing number of Chinese vessels around the shoal and demanded an explanation from China’s ambassador.

A Philippine official said the release of the photographs and a map was ordered by Defense Secretary Delfin Lorenzana, who is at the Association of Southeast Asian Nations (Asean) summit in Vientiane with President Duterte.

Duterte plans to ask Chinese Premier Li Keqiang at the summit whether the vessels were on another island-building mission on Scarborough  Shoal.

Asked how disturbed the Philippines was by the presence of the Chinese ships, Duterte’s spokesperson, Ernesto Abella, told a news conference: “Enough to announce it.”

Abella said that China and the Philippines were discussing the issue, but he gave no details.

“There are talks at this stage,” Abella said. He refused to comment if the Philippine policy was to prevent any country from constructing at or transforming Scarborough Shoal, a coral reef, into an island.

Although Scarborough Shoal is merely a few rocks poking above the sea, it is important to the Philippines because it is within its 370-km exclusive economic zone (EEZ) and because of its tranquil waters and rich stocks of fish.

Manila says Beijing’s blockade of the shoal is a violation of international law.

China has built artificial islands on seven reefs in the hotly contested Spratly archipelago in the middle of the South China Sea.

If the Chinese government confirms the suspicion, the Philippines would lodge an official protest, according to Lorenzana.

China has not commented on the accusations.

China claims nearly all of the sea, through which $5 trillion in shipping trade passes annually, even waters approaching the coasts of the Philippines and other Southeast Asian nations.

Besides the Philippines, Vietnam, Brunei, Malaysia and Taiwan have competing claims in the South China Sea, dotted by hundreds of islets, reefs and atolls believed to be sitting atop vast energy reserves.

In July, the Philippines won a sweeping victory in the UN-backed Permanent Court of Arbitration in The Hague, which ruled that China had no legal title to almost all of the South China Sea and that it had violated the Philippines’ rights to fish and explore for minerals in its own EEZ.

A draft Asean communiqué seen by Reuters on Monday listed eight points related to the South China Sea, but made no mention of the ruling.

A Philippine security official traveling with Duterte said it was a challenge for the government to explain why Filipino fishermen could not go back and fish in the area when the Hague tribunal had ruled that Scarborough Shoal was a fishing ground for all.

“We won the arbitral court, but we could not enforce it, how can we explain that to our own fishermen?” said the official, who declined to be named.

“So, we wanted to talk to China and resolve the issue, but the situation like this is making it more difficult. The President is asking what is China’s intentions in the area,” the official said.

The competing territorial claims have long been a major source of tension in the region, with China using deadly force twice to seize control of islands from Vietnam.

Tensions have escalated sharply in recent years as China has built islands in the Spratlys in anticipation of an adverse ruling from the Hague tribunal.

It has topped at least three of the artificial islands with airstrips capable of receiving large military planes.

In response, Vietnam, which had come to blows with China in the Paracel archipelago in another part of the South China Sea, has deployed mobile missiles to islands it occupies in the Spratlys.

The United States has reacted to that buildup by sailing warships close to China’s artificial islands, and sending warplanes over them.

This has deeply angered China, which has accused the Americans of “militarizing the region,” and raised concerns of armed conflict between the two world powers.

In ruling for the Philippines in July, the arbitral tribunal also said China’s construction of artificial islands in the disputed waters was illegal.

China seized Scarborough  Shoal in 2012 after a two-month standoff with the Philippine Navy and the Philippine Coast Guard and has since deployed large fishing fleets while blocking Filipino fishermen.

Expanding that presence with a military outpost is vital to achieving China’s ambitions of controlling the sea, according to security analysts.

US officials fear a Chinese military airfield at the shoal would enable China to enforce a threatened air defense identification zone in the sea.

Another major concern is it allows China a military base close to where US forces regularly operate in Luzon.

US President Barack Obama reportedly directly warned his Chinese counterpart, Xi Jinping, during a meeting in March not to push ahead with any artificial island building there.

The United States, which is a treaty ally of the Philippines, has repeatedly said it does not want to fight a war over the shoal.

But military confrontation cannot be ruled out if China does start to build an island, according to security analysts.

“We could witness a physical confrontation between Chinese Coast Guard and Filipino vessels backed up by the US Navy,” Carl Thayer, an emeritus professor at Australia’s University of New South Wales, told AFP.

An Obama aide on Wednesday played down the significance of the Philippine photos, telling reporters the United States had not detected any unusual activity at Scarborough Shoal.

When pressed on initial Philippine accusations on Monday before the photos were released, China insisted there were no dredging boats or others to prepare for island building.

President Duterte had said he did not want to anger China by highlighting the territorial row at the Asean summit in Laos this week.

But the release of the photos came just a few hours before  Duterte and other leaders from the 10-member regional bloc met China’s Li.

Obama is also in Laos for the regional meetings, which will conclude on Thursday with an East Asia summit.

Lorenzana told reporters on Wednesday that the US government had also expressed concern over the increase in the number of Chinese ships at Scarborogh Shoal.

“They are also worried. It is very worrisome because that area is ours. If they are able to make an island, we cannot take that from them,” he said.

“If they are able to construct an island there, our security will be at risk because it’s just [230  km] away from Masinloc in Zambales,” he said. “Our EEZ is 370 kilometers.”

Abella said Duterte did not bring up the Scarborough Shoal issue at the meeting with Li.

He said the government was in backdoor talks with China to deal with the controversy.

Andanar quoted Duterte as saying during the meeting that “international disputes should inspire us to work together with adherence to the rule of law and international governing bodies.”

He said Duterte also called on the other Asean leaders to “put words into actions and be on the side of peace.”

Reports from the wires and Marlon Ramos/rga