Q&A on Scarborough Shoal, a flashpoint in Asia | Global News

Q&A on Scarborough Shoal, a flashpoint in Asia 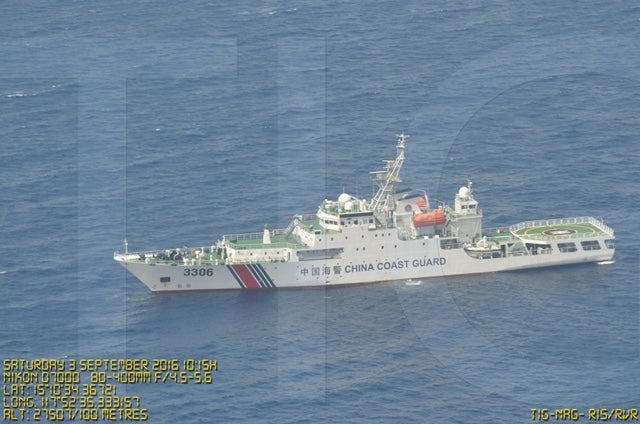 The Philippines accused China Wednesday of secretly preparing to build an artificial island on Scarborough Shoal, a tiny and remote outpost in a contested area of the South China Sea.

Doing so risks a military confrontation between China and the United States. Here are five key questions and answers about the shoal and why it is so important.

A small ring of reefs that lie about 230 kilometers (140 miles) from the main Philippine island of Luzon and 1,000 kilometers from the nearest major Chinese landmass, Hainan island.

It is rich with marine life that fishermen from the Philippines, China and Vietnam have tapped for generations.

Although it is in the Philippines’ Exclusive Economic Zone (EEZ), China and Taiwan also claim it falls within their sovereign territory, part of a broader territorial row across the South China Sea.

If it’s so small and remote, why is it important?

China has moved aggressively in recent years to cement its claims to most of the South China Sea, assert military control over the waters and thus weaken US influence.

China has built artificial islands in the Spratlys archipelago, a strategic location in the southern part of the sea. Those islands could become military outposts.

Because of its position, another military outpost at Scarborough Shoal is seen as the last major physical step required to secure control of the sea.

An outpost at the shoal would also put Chinese fighter jets and missiles within easy striking distance of US forces stationed in the Philippines.

The shoal also commands the northeast exit of the sea, so a Chinese military outpost there could stop other countries navies from using the vital stretch of waters.

What’s happened there in the past?

The shoal became part of US territory when the Philippines became an American colony through the Treaty of Paris in 1898. It was transferred to the Philippines upon independence in 1946.

The Philippine navy then used it as a gunnery range for joint exercises with US forces, who had permanent bases nearby on Luzon island until 1991.

China took effective control of the shoal after an April 2012 stand-off with the Philippine Navy, and has since blocked Filipino fishermen from entering the shoal.

A UN-backed tribunal ruled in July that China’s claims to the sea had no legal basis. It also ruled that China blocking Filipino fishermen at the shoal was illegal.

China has vowed to ignore the tribunal’s ruling and press on with artificial island building. Yet it has in recent days denied doing any construction work at the shoal.

However China may seek to quickly build the island before Obama ends his eight-year term in January, according to John Blaxland, a security expert at the Australian National University’s College of Asia and the Pacific.

Blaxland said China may seek to take advantage of what they perceive as a “weak” president.

“They (China) may well calculate now is the time to do it because they won’t meet strong resistance,” Blaxland told AFP.

Is there really a risk of military confrontation?

China has proved it is willing to use deadly force to enforce its claims in the South China Sea.

China gained control of the Paracel Islands in 1974 following clashes with the South Vietnamese Navy that left about 50 Vietnamese troops dead.

Vietnam and China fought a naval battle on Johnson Reef in the Spratlys in 1988 that killed about 70 Vietnamese military personnel.

Washington does not want to get into a war with Beijing, but it may be drawn into a conflict, according to Carl Thayer, an emeritus professor at Australia’s University of New South Wales.

“We could witness a physical confrontation between (the) Chinese Coast Guard and Filipino vessels backed by the US Navy,” Thayer told AFP.

China: Maritime row ‘should not represent’ relations to Asean