Duterte treated like ‘a rockstar’ at Asean Summit, says Andanar 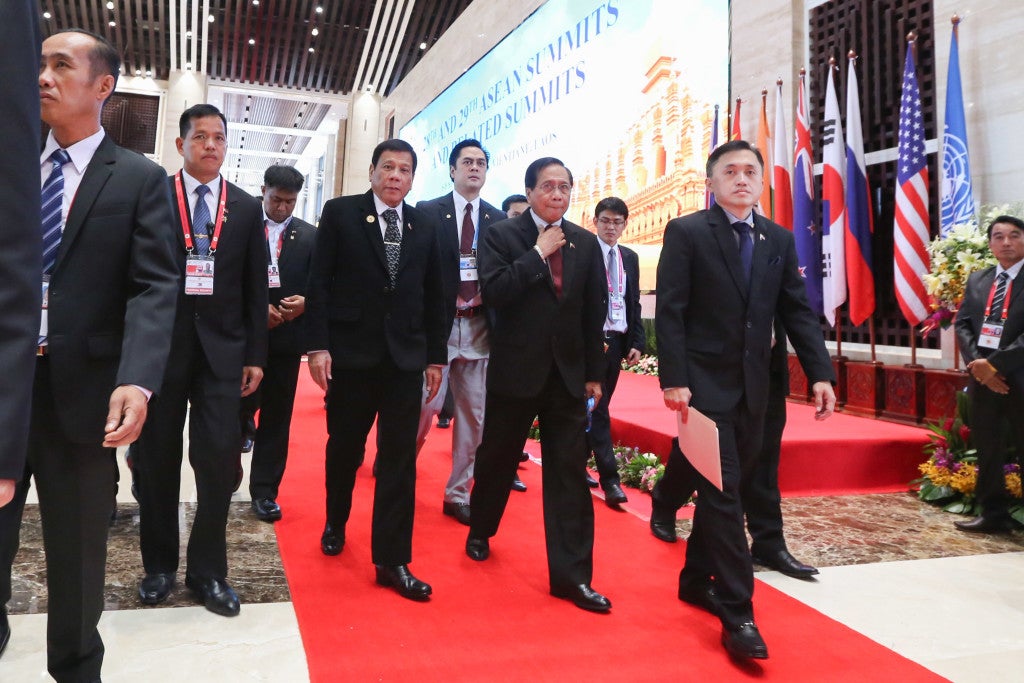 President Rodrigo R. Duterte and his delegation arrive at the National Convention Center in Vientiane, Laos on September 7 to attend the second day of the ASEAN Summit. KING RODRIGUEZ/PPD

That was how President Duterte was treated by his counterparts and other official delegates at the 28th and 29th Association of Southeast Asian Nations (Asean) summits here, Presidential Communications Secretary Martin Andanar said Wednesday.

“President Duterte is a rockstar not only in our country, but also in other countries like Laos and Japan,” Andanar told a press conference here.

“Other foreign ministers and delegates have scrambled to get a selfie with our President,” he continued.

Presidential spokesperson Ernesto Abella said Mr. Duterte received “empathy” and warm welcome from leaders of the Asean’s 10 member-states in his debut on the international political stage.

According to Abella, it was “admirable” how the President handled the conversation he had with his fellow heads of state during the Asean-China summit.

“He has the capacity for statesmanship that is usually missed because of the noise regarding some of his statements,” he said. JE

Read Next
China: Maritime row ‘should not represent’ relations to Asean
EDITORS' PICK
Pru Life UK receives four golden arrows for solid corporate governance
Malls adjust ‘NCR Plus’ operating hours for April 12-30 MECQ
Pre-order the new vivo Y20s [G] to get a free TWS earphone
‘NCR Plus’ to be under MECQ starting April 12 until April 30 — Palace
Metro Manila to have shortened curfew hours from 8 p.m. to 5 a.m. under MECQ
Speed up your game with the new vivo Y20s [G]
MOST READ
Stop ‘creeping occupation’ of ‘militia’ boats in WPS, Pacquiao asks China
Bea Alonzo clarifies status of her relationship with Dominic Roque
Convicted former aide of Sen. Bong Revilla dies — BuCor
Locsin to China: ‘Then move out’
Don't miss out on the latest news and information.