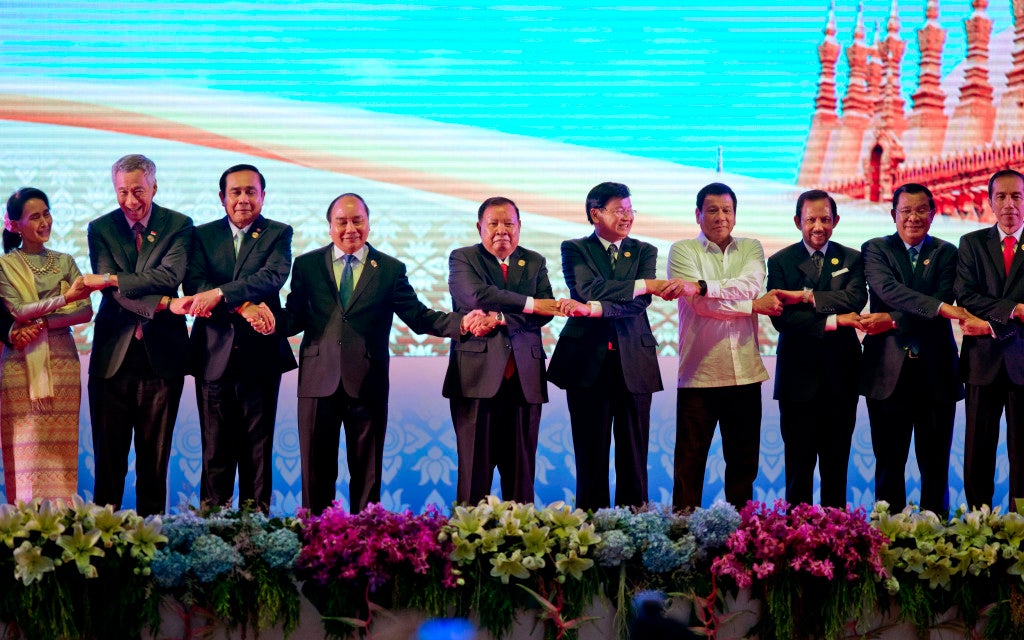 VIENTIANE, Laos—The controversy spawned by President Rodrigo Duterte’s profanity-laced remarks against US President Barack Obama has spoiled his maiden appearance in the international stage as head of state.

Wearing a white barong Tagalog, the President on Tuesday attended the opening ceremony of the 28th and 29th Association of Southeast Asian Nations (Asean) summits, which coincided with Obama’s state visit to this socialist country.

Mr. Duterte, whose attendance at the regional bloc’s yearly conference was his first foreign travel since he took office on June 30, warmly shook hands and exchanged pleasantries with the nine other heads of Asean member-states during the formal opening held at the National Convention Center.

Before the summit, he briefly met with Singaporean Prime Minister Lee Hsien Loong, who invited him to visit the former British colony.

The two leaders also made their commitment to further develop the trade relations between the two countries.

The President then held a bilateral meeting with Japanese Prime Minister Shinzo Abe, who offered sympathies for the families of those who died and were hurt in an explosion in Davao City last week.

“Mr. President, (you are) quite a famous figure also in Japan and I’m very excited to see you in person,” Abe told the President.

“I would like to take this opportunity to express my heartfelt condolences for the victims and their family members,” he said.

The Japanese leader said he was looking forward to developing the cooperation between his country and the Philippines under the Duterte administration.

He noted that the two countries will be marking the 60th anniversary of the “normalization of the diplomatic relationship” of Japan and the Philippines.

In response, the President expressed his gratitude to Abe for the financial aids which the Japan International Cooperation Agency (Jica) had given to the Philippines and his hometown of Davao.

“For so many years, Jica has been there. Japan has been kind enough to extend us all the assistance for further development in our country and as a matter of fact, our trade shows that we export more to Japan than before,” Mr. Duterte said.

“We know that Japan is one of our friendly neighbors,” he continued. “And we also would like to stand by you in the matter of the security in the Korean Peninsula. I support your stand. And we hope that we can work together for a better and a greater, peaceful area.”

Presidential spokesperson Ernesto Abella said the two leaders briefly discussed the decision of the Permanent Court of Arbitration in The Hague which declared illegal China’s nine-dash line claim over the South China Sea.

“(Both) agreed that there must be freedom of navigation. On the whole, it was a very positive exchange,” Abella told reporters.

According to him, the Vietnamese prime minister made a “long-term commitment” to supply the Philippines with rice.

“On the economic front, Vietnam was encouraging the Philippines can come to (their country) and invest more, have more trade,” Abella said.