Leaders meet in Laos to map out Asean’s direction 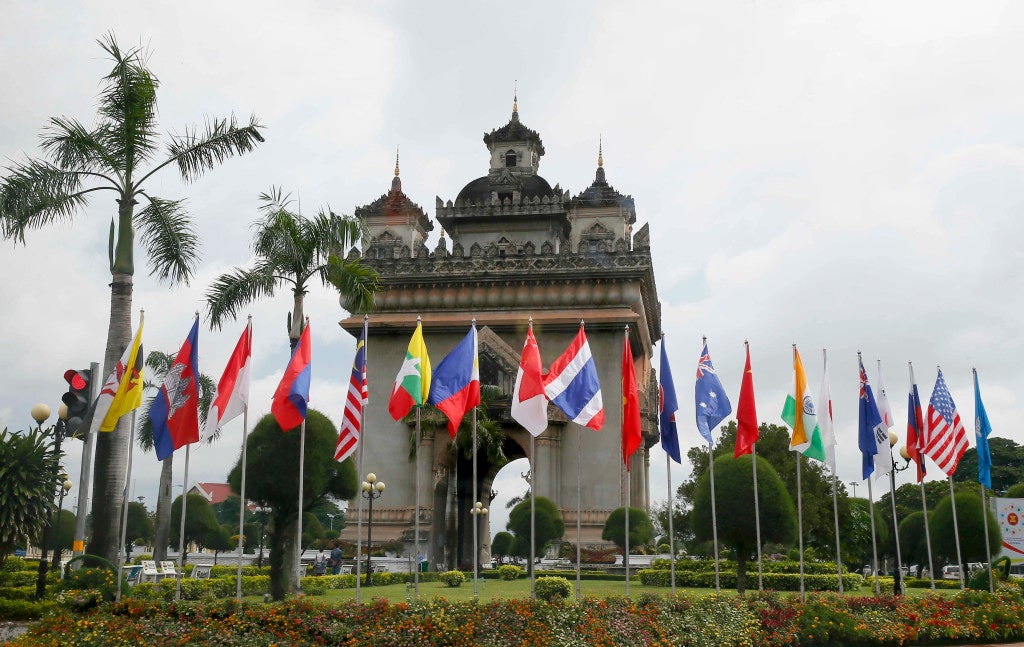 Flags of the 10-member ASEAN (Association of Southeast Asian Nations) and its dialogue partners are placed around the Patuxay Monument in downtown Vientiane, Laos, Monday, Sept. 5, 2016. Laos is this year’s host of the 28th and 29th ASEAN Summits and related summits that include the United States, Canada, Russia, China, Japan, Korea, Australia, New Zealand and India. AP

Asean leaders started arriving in Vientiane Monday to attend their first summit, nearly a year after the launch of the Asean Community in Kuala Lumpur.

Prime Minister Najib Razak, already seen as a vete­ran regional leader, will be joined by first timers like Philippine Presi­dent Rodrigo Duterte and Aung Sang Suu Kyi who is representing the Myanmar president.

The three-day 28th and 29th Summits, hosted back to back by Laos, will provide the opportunity for the leaders to exchange views on the future direction of Asean and its conduct of external relations as well as important regional and international issues.

Asean officials noted that it was only the first year of the Asean Community establishment and not expect miracles in wanting a quick Asean integration.

“What is important is for the leaders to find common ground in trying to maintain unity and centrality,” said a diplomat. Asean unity is being tested over the South China Sea issue as four of its members – Brunei, Malaysia, the Philippines and Vietnam – are claimants to the maritime area, apart from China and Taiwan.

Asean and China have signed a Declaration on the Conduct of Parties in the South China Sea and have been working on a binding Code of Conduct (CoC) to address numerous issues faced by claimant countries in the overlapping maritime area.

Last month, a breakthrough in talks at the Asean-China joint working group (JWG) was achieved and officials have set a deadline to finish a framework for a CoC by the middle of next year.

The JWG has also approved a guideline for a China and Asean hotline for use during maritime emergencies and a joint declaration that the Code for Unplanned Encounters at Sea (Cues), signed by more than 20 Pacific nations in 2014, applies to the South China Sea.

Najib and Asean leaders will receive documents on the hotline and Cues during the Asean and China summit tomorrow.

Asean officials also said at the East Asian Summit (EAS) that a meeting between the Asean 10 and Australia, China, India, Japan, New Zealand, South Korea, Russia and the United States on Thursday will adopt a decla­ration on migrants and trafficking in persons.

The declaration is in support of the Asean Convention Against Trafficking in Persons, Especially Women and Children (Actip) signed during last year’s Asean summit in Kuala Lumpur.

Actip’s objectives, among others, are to effectively prevent and combat trafficking in persons, especially women and children; protect and assist human trafficking victims with full respect for their human rights; and promote cooperation among the relevant parties.

The EAS declaration precedes the United Nations General Assembly (UNGA) hosting a high level summit on Sept 19 to address large movements and migrants with the aim of bringing countries together behind a coordinated approach.

Officials said the UNGA event in New York is important as Malaysia is one of the affected countries in terms of migrants and refugees.

“Principally, we want collective and concerted efforts and action by the international community, inclu­ding the UN, to tackle the pro­blems,” said an official./rga

No mention of UN court ruling in Asean draft