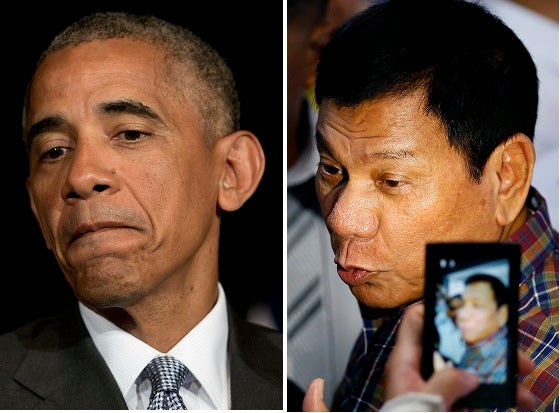 U.S. President Barack Obama (left) pauses as he speaks during a news conference in China’s Zhejiang province. The White House said Obama had canceled a scheduled meeting with Philippine President Rodrigo Duterte (right) on the sidelines of the ASEAN Summit on Tuesday, Sept. 6, 2016, after the latter launched a foul-mouthed tirade against him. AP

It’s unusual for one president to tell another what to say or not say, and much rarer to call the other a “son of a bitch.” Duterte managed to do both just before flying to Laos for a regional summit, warning Obama not to challenge him over extrajudicial killings in the Philippines.

“Clearly, he’s a colorful guy,” Obama said. “What I’ve instructed my team to do is talk to their Philippine counterparts to find out is this in fact a time where we can have some constructive, productive conversations.”

READ: Duterte to Obama:  Don’t lecture me on rights, PH not a US colony

“President Obama will not be holding a bilateral meeting with President Duterte of the Philippines this afternoon,” National Security Council spokesman Ned Price said.

“Instead, he will meet with President Park (Geun-hye) of the Republic of Korea.”

Duterte has been under intense global scrutiny over the more than 2,000 suspected drug dealers and users killed since he took office. Obama had said he planned to raise the issue in his first meeting with Duterte, but the Philippine leader insisted he was only listening to his own country’s people.

“You must be respectful,” Duterte said of Obama. “Do not just throw questions.” Using the Tagalog phrase for “son of a bitch,” he said, “Putang ina I will swear at you in that forum.” He made the comment to reporters in Manilla.

READ: If Obama raises rights issues, Duterte says he will use ‘P’ word

“We will be wallowing in the mud like pigs if you do that to me,” Duterte said.

Eager to show he wouldn’t yield, Obama said he would “undoubtedly” still bring up human rights and due process concerns “if and when” the two do meet.

The bizarre rift with the leader of a U.S. treaty ally was the most glaring example of how Obama has frequently found himself bound to foreign countries and leaders whose ties to the U.S. are critical even if their values sharply diverge.

In Hangzhou this week, Obama’s first stop in Asia, he heaped praise on Chinese President Xi Jinping for hosting the Group of 20 economic summit in his country, an authoritarian state long accused of human rights violations. His next stop was another one-party communist country with a dismal rights record: Laos, where mysterious disappearances have fueled concerns about a government crackdown.

And sitting down with Turkish President Recep Tayyip Erdogan, Obama made no mention in public of the roughly 35,000 people Erdogan’s government detained following the summer’s failed coup in Turkey. Instead, he worked to reassure the NATO ally the U.S. would help bring to justice whoever was responsible for plotting the coup.

Obama also spent about 90 minutes Monday with Russian President Vladimir Putin, another leader whose fate seems intertwined with Obama’s in all the wrong ways. On opposing sides of many global issues, the U.S. and Russia are nonetheless trying to broker a deal to address the Syrian civil war and perhaps even partner militarily there.

“President Putin’s less colorful,” Obama said, comparing him with Duterte. “But typically the tone of our meetings is candid, blunt, business-like.”

Managing Duterte has become a worsening headache for Obama since the Filipino took office on June 30, pledging his foreign policy wouldn’t be constricted by reliance on the U.S. Washington has tried largely to look the other way as Duterte has pursued closer relations with China, a marked shift for the Philippines considering recent tensions over Beijing’s aspirations in the South China Sea.

A public break from the Philippines would put Obama in a tough position, given the Southeast Asian nation’s status as a longtime U.S. ally. The Obama administration has sought to compartmentalize by arguing that military and other cooperation won’t be jeopardized even if it detests the current Philippine leader’s tone.

Last month, Duterte said he didn’t mind Secretary of State John Kerry but “had a feud with his gay ambassador — son of a bitch, I’m annoyed with that guy.” He applied the same moniker to an Australian missionary who was gang-raped and killed, and even to Pope Francis, even though the Philippines is a heavily Catholic nation. He later apologized.

With a reputation as a tough-on-crime former mayor, Duterte has alarmed human rights groups with his deadly campaign against drugs, which Duterte has described as a harsh war. He has said the battle doesn’t amount to genocide but has vowed to go to jail if needed to defend police and military members carrying out his orders./rga

Awkward welcome for Obama prompts cheeky US tweet vs China